UC California reports toughest year ever for graduating seniors while the TSA cracks down on snow globes. Say what?

* ... UC ADMISSIONS: It wasn't surprising to read that this turned out to be one of the most competitive years ever to get into one of the nine University of California (UC) campuses. Between state budget cutbacks and the sheer number of graduating seniors, the UC system admitted just 71.6 percent of applicants, compared to 75.4 percent two years ago. The UC system has always been the crown jewel of the California colleges, but there are plenty of other worthy schools out there. Consider some of the kids over at the AVID program (Advancement Via Individual Determination) at Taft Union High School. AVID teacher Debra Popejoy noted that because of financial constraints, most of the AVID kids will be attending junior colleges, but others are headed to four year institutions. Among them are Mayra Aguilar and Emmanuel Medina going to Loyola-Marymount University,  Chesney Doak and Hannah Koerner will be attending UC Davis, and Stephannie Heerdink, Brian Parsons and Hailey Smith will be attending CSUB. Also, Stewart Bandy is going to Humboldt State while Kathy Lopez will be attending Azusa Pacific.  Jared Miller will be attending CSU Monterey Bay while Will Palmer is heading to Cal Baptist.  Lastly, Alberto Uribe is going to UC Merced. Congrats to all these kids.

* ... BANANA SLUG? Reader Laura Wolfe emailed me that her son Matthew had been accepted to the University of California at Santa Barbara and UC Santa Cruz. Laura is a UC Santa Barbara graduate and pointed out other family members graduated from UC Berkeley, UCLA and UC San Francisco. Laura says Matthew is heading for Santa Cruz and "I'm okay with that.!"

* ... SNOW GLOBES: If you plan on any air travel, leave that snow globe at home or risk the wrath of the Transportation Security Agency (TSA). Former Bakersfield resident Mary Lou Fulton posted a Tweet the other day noting a sign at the Orange County airport warning passengers against carrying aboard snow globes because they might contain potentially hazardous material. Huh? 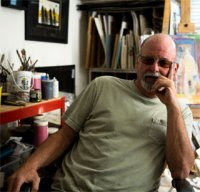 * ... ART SHERWYN: Our town is full of interesting characters, and one of the more intelligent and delightful ones is Art Sherwyn, a long-time art teacher, tennis coach and accomplished artist. On Thursday, April 29, Metro Galleries downtown will sponsor an "Evening with Art Sherwyn" during which he will share his perspectives on making art. Sherwyn's paintings will be on display (and I assume for sale) but the real draw here is Art himself. He is a fascinating story teller and intellect who has multiple talents and interests. The cost is $30. You can call the gallery to reserve your spot.

* ... BAKERSFIELDISM: You know you're from Bakersfield when "you know who is engaged to whom by reading the Olcott's ad in The Californian."
Posted by Richard Beene at 10:37 AM