* ... WASCO GRAD: Audra Miller wrote to tell me about her son Carl Miller, who graduated from  St. John's Catholic School in Wasco and then Wasco High School. He went on to earn his PhD from UCLA and did post doctorate work at the Harvard Medical School. He  is now working in Seattle as a scientist for Dendreon, a company that recently announced a break through in the treatment of prostate cancer. "There is great hope that this prostate cancer treatment will be a stepping stone for the treatment of many other types of cancers," she said. Well done.

* ... OFF TO OREGON: Kudos go out to Paul Brumfield, son of Superior Court Judge Lorna Brumfield and local attorney Robert Brumfield,  for getting an academic scholarship to attend the University of Oregon in Eugene. Paul will major in music (with a minor in business) and is coming off participating in the California state honor choir. As his father said, "Go Ducks!"

* ... GUN RIGHTS: Is there a better argument for the right to bear arms than the brutal killing of grandmother Dorothy Pauline Session? She was beaten to death in her east Bakersfield home by some lost children who apparently just happened on the house intent to steal a few things.  How many of these predators walk our streets on any given day? I can think of few better arguments for the Second Amendment than senseless cases like this. (suspects appear in court in photo below; Dorothy Session below) 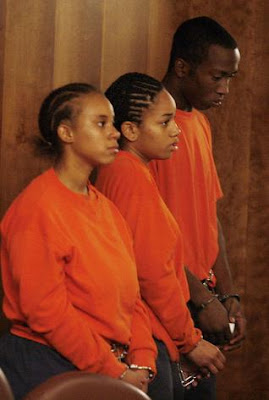 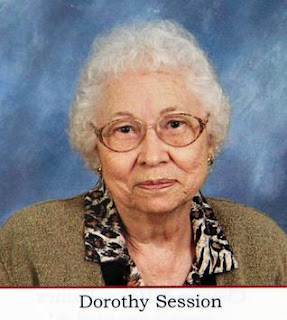 * ... MEA CULPA: In a recent post on the engagement of Morgan Houchin and Jillian Giumarra, I neglected to mention that Jill's parents are John and Pamela Giumarra, and the mother of the Houchin boys is Candus Houchin-Birnbaum. That was bad form on my part and  I apologize. Morgan's brother and Jillian's sister are already married, keeping this one all in the family.

* ... SAN JOSE STATE: Heard from Mark Powell, a reporter at The Tehachapi News, who wanted  to know how big the community of San Jose State University alumni was locally. Powell noted that he graduated from San Jose State, as did long-time Californian courts reporter Steve Swenson and Jose Gaspar of  KBAK Eyewitness News 29. In addition, former KBAK producer Meg Stewart is a San  Jose State graduate.

* ... BAKERSFIELDISM: You know you're from Bakersfield when "you know the Garces circle is not a quiz item on a geometry test."
Posted by Richard Beene at 6:55 AM

C'mon, Richard!
How do you segway from a brutal killng of an 80-something year-old woman by three teenagers to gunrights? My guess is that most grandmotherly types are not planning for home invasions with (or without) firearms.
I say a more appropriate argument would be for more frequent carrying out of death penalties....let's reduce the gene pool of the kind of dirt that commits these heinous crimes. Why keep these worthless scumbags alive as wards of the state? I would gladly flip the switch.

I applaud your support of the second amendment. I think that Bakersfield is becoming more of a violent city and soon we will be on par with L.A. for crime. People that fear the second amendment are misinformed. Just think of the brutality in African countries that has been carried out with machetes. The criminal element is the criminal element and it does not matter what the tool is. I believe that more people should take firearms training and courses on responsible gun ownership. It is too bad that many in our community think that all gun owners are bad people. It seems that more people are lost via drunk driving accidents in Bakersfield than by non criminal gun owners. One has to remember that the greatest tragedies that have happened were generally organized by governments; i.e. the holocaust, the genocides in Africa, the khamer rouge in Cambodia as well as the ethnic cleansing in the Bosnia area amongst others were all started by political processes. I sometimes wonder, if these victims had been able to get access to firearms, if things would have worked out differently for them. We have to worry about a government that is willing to take away the right to own firearms as it leaves many people vulnerable.