Rep. Kevin McCarthy (R-Bakersfield) gives his report for the week. In his words:

"As we provide for our families every day, we all know that every hard-earned dollar is important. This is an easy principle for most Americans to understand, but a hard one for Washington.

Unfortunately, federal spending is growing faster than federal revenue.  As I often say, Washington does not have a revenue problem, we have a spending problem.  The CBO predicts that the 2010 federal
deficit could be as high as $1.5 trillion and the federal debt will reach $13.2 trillion.  These numbers are astounding, especially on days like today, when the Bureau of Labor Statistics announced that
national unemployment for the month of April rose to 9.9%. Clearly all this spending is not creating jobs. On that point, earlier this week, I had lunch with former Massachusetts Governor, Mitt Romney and we
talked about job creation.  However, rather than focusing on policies to foster economic prosperity, several of the President’s economic advisors have floated the idea of imposing a job-killing Value Added
Tax (VAT) on American products and services.
To that end, I joined others in sending a letter to the President’s debt commission opposing
adding a VAT to our current tax system.  I don’t believe that our country will ever be able to fix its problems by taxing its way to prosperity.  American success has always been rooted in our entrepreneurs and small business owners—a VAT will only destroy jobs and crush innovation.

It was great to spend all day Friday working in Bakersfield for a change.  This afternoon, I am honoring twenty of Kern’s best and brightest high school students for their positive achievements with my
office’s Congressional Merit Award.  Earlier this year, high school principals selected one outstanding graduating senior per school to receive this Merit Award. Congratulations are in order for all these
stellar high school students who have demonstrated academic excellence by earning a 3.5 GPA or higher, exemplary school citizenship and leadership, along with community service.
On Monday I’ll be in Paso Robles to honor those students from San Luis Obispo County.

"As a part of First Friday this evening, I am at Metro Galleries downtown for a reception to honor the winners of the 29th Annual Congressional Art Competition for high school students.  Out of the
105 entries from 14 schools that my office received, the overall winner is Sona Shah, who is a junior at Stockdale High School.  Her winning piece, “Playing Art,” which is an excellent pastel and
charcoal, pictures six different children working on art outdoors. Sona will travel to D.C. with her parents, Dr. and Mrs. Nilesh Shah, and attend the Congressional exhibit opening and her artwork will be
displayed in the corridor leading to the U.S. Capitol for one year. Students were also awarded for placing first, second, third along with honorable mention for the following three categories: photography,
computer-generated art, and all other mediums.  All winners have the option of displaying their artwork in my Washington office for a year for visiting constituents to see. 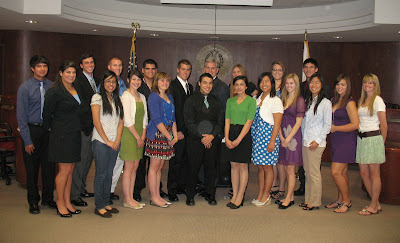 "Thanks for reading, and remember to do something nice for your Mom!
Posted by Richard Beene at 7:21 PM