* ... GOOD NEWS: If there  is a winner in this terrible oil disaster in the Gulf of Mexico, it may be Occidental Petroleum. At least that's the view of Bloomberg news service, which said Oxy is "leading a rush to find crude on land" as the disaster spurs tougher offshore drilling rules. Oxy recently doubled its estimate for a discovery near Bakersfield, to the equivalent of as much as $34 billion at current prices. Bloomberg said Oxy "bucked the oil industry migration to deep-sea drilling during the past decade and focused on onshore fields from California to Texas to Abu Dhabi." The story went on to say that Oxy is keeping the precise location of its Kern County discovery a secret to prevent competitors from trying to buy adjacent tracks of land. 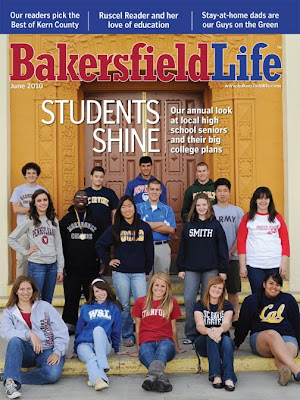 * ... GARCES POOL: Nice to hear that Garces Memorial High School is getting ready to break ground on a new state-of-the-art competition swimming pool .  It will have 12 practice lanes and 10 competition lanes and a diving area with a depth of 14 feet. It will also have two one-meter diving boards and one three-meter board. It is supposed to be completed in December.


* .,.. DRILLER NATION: Sue and Roger Allred wrote to tell me about their ninth child who will be graduating from Bakersfield High School on June 3. Their oldest graduated from BHS in 1993, the 100th graduating class of the school. "Our children have five bachelors degrees, one masters in education, one is a lawyer, one is going for a masters in physics, four are stay at home moms, and three are still working on degrees. We have had a wonderful time at BHS and thank those who have enriched our children's lives." And apparently all nine kids will be home for the graduation, coming from places like New York City, Brooklet, Ga., Salt Lake City, Ut., Tucson, Az., San Diego and of course Bakersfield.


* ... AMGEN TOUR: A reader asked me to list the three committee chairmen who worked so hard to make last week's Amgen Tour of California a success, so here they are: Sam Ames of Action Sports was responsible for the VIP area, Janey Clary was in charge of the hundreds of volunteers and Doug Gosling, an attorney with Klein, DeNatale, was chairman of the festival committee, where all the food and vendors were set up.


* ... EAST BAKERSFIELD: You know you're an East Bakersfield old timer if  "you remember what the original price of a hamburger at Ken-Ken's was. 10 cents."
Posted by Richard Beene at 10:24 AM