* ... BLOG LOVE: One of the blogs I regularly follow is "Californiality," an upbeat look at the Golden State written by Los Angeles resident Mark Lorier. He posted a wonderful take on Bakersfield this week, highlighting our work ethic, culture and desire to pull ourselves out of this recession. Said Mark: "Bakersfield's famous work ethic is now bolstered by a renewed optimism and enthusiasm for the future. Counting their blessings, local citizens are starting to look at what's RIGHT with Bakersfield - and capitalize from it... Corporations are relocating to Bakersfield due to local business friendly policies, affordable real estate and tax savings. The city even has the largest ice cream plant in America - so it's officially kid approved." Thanks for the kind words, Mark. Read the entire post here.

* ... URNER'S: Steve Urner wrote to recall when his grandfather, Phil Urner, worked at the family store with this founding brother, Dave Urner Sr. "I remember around 1953 when Urner's got the first color TV in Bakersfield. They were very expensive. Not even the family could afford one. But we would all gather down at the store on New Year's day to watch the Rose Parade broadcast in color through KTLA. It was fun! And to add to the 'you know you're from Bakersfield' thoughts: you can remember the live alligator kept in a watery pen in the alley next to the backdoor entrance to Snider's Bicycle Shop in East Bakersfield. There ya go!"

* ... GET A GUN: Loved the advertisement in The Californian this week by Bland Solar and Air offering new customers a gun for their business. It read:  "Reward: Buy Solar. Get a Gun." This is shrewd marketing in an area where hunting and gun sports are so popular and it certainly got my attention. Bland Solar would not actually buy the customer a gun but rather issue a $400 gift certificate to use at "applicable sporting goods" stores. Or, if you already are well stocked in the guns and ammo department, Bland Solar would provide a $400 rebate.

* ... FALKE EXITS: Emily Falke, the long-time curator at the Bakersfield Museum of Art, is heading for greener pastures in Santa Barbara. Falke landed a job as director of education and exhibits at the Santa Barbara Maritime Museum. Museum Executive Director Bernie Herman said Falke would be assisting in the search for a replacement and would be leaving her post at the end of this month. She has been at the museum for the past 10 years. 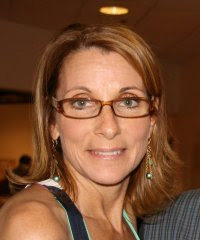 * ... 37 YEARS: Congrats to two couples who celebrated their 37th wedding anniversaries on the same day. That would be Bernie and Joan Herman, both longtime civic boosters and activists, and Susan and Rod Hersberger, who also are deeply involved in our community. Bernie is executive director of the Bakersfield Museum of Art and Joan is a counselor at Foothill High School. Susan Hersberger is director of public affairs at Aera Energy and husband Rod is dean of library services at Cal State Bakersfield.

* ... OVERHEARD: Teen angst as overheard by long-time friend Joel Sappell at a Target: "It's hard buying a card for your mom when you're mad at her."

* ... BAKERSFIELDISM: From reader Lee Fox: "You know you're from East Bakersfield is you remember Dudley's on the corner of Mt. Vernon and Quincy Street."
Posted by Richard Beene at 11:31 AM