* .. FAREWELL: Mike Jenner, the longtime editor and voice of The Californian in his popular weekly "Sound Off" column, is leaving to become the dean of an endowed chair of journalism at his alma mater, the University of Missouri. Mike is one of our community's true good guys, deeply involved in civic life and committed to making this a better place to live. He came here a single man 17 years ago and is leaving with a wife (Jean), two energetic boys (Joe and Andrew) and wonderful memories of Bakersfield. He is a dear friend and he will be missed. Replacing him is another longtime friend of mine, John Arthur (photo below). John is former executive editor of the Los Angeles Times where he headed coverage for two Pulitzer Prize events, the 1994 Northridge earthquake and the North Hollywood bank shootout. A resident of Santa Monica, John's wife is from Bakersfield so he knows our community well. No doubt he'll soon know it even better. 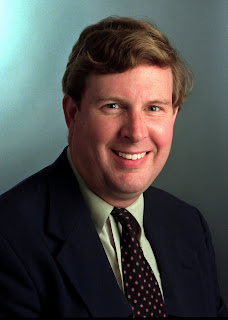 * ... SCRIVNER-PEREZ: Now that Zack Scrivner has made it into the runoff with Steve Perez for the 2nd District county Supervisor post, you wonder what the unions will do to keep him out of office. The fire fighter's union launched a sharp and expensive campaign against Scrivner, who has led the charge for public pension reform and to make the public employees pick up more of their health care costs. Perez served two terms as a supervisor as well as 26 years in the Kern County Sheriff's Office. This should be a spirited race to watch.

* ... EAST BAKO: A reader named Kelly submitted these thoughts about growing up in East Bakersfield: "The Big T atop the ThriftyMart grocery store! How about on the Fourth of July when Bakersfield College would shoot out toys attached to parachutes into the surrounding neighborhoods! I cannot talk about the Helms man without getting all misty eyed!"

* ... DUI CHECKPOINTS: The Bakersfield Police Department will be conducting DUI checkpoints on Saturday, June 19, and the following Friday, June 25. To avoid trouble, simply don't drink and drive or take a cab. No sense asking for trouble. Be careful out there.

* ... TIME FLIES: Hard to believe it has been over eight months since San Joaquin Bank was seized by state and federal regulators and shut down. For years the bank was a local institution known for supporting non-profits and local businesses. Now it's gone and most of the executives and employees have landed elsewhere. Former bank financial officer Steve Annis is now at Valley Republic Bank, and former CEO Bart Hill is working in fund raising at California State University Bakersfield.

* ... SMASH 'N GRAB: A friend was the victim of a "smash and grab" recently when she parked and locked her car - for just two minutes - in front of a prominent retailer off Truxtun Extension. Thinking she was safe in broad daylight with the car locked, she left her purse on her seat. She returned just minutes later to a smashed window and stolen purse.A bad economy makes for desperate times.

* ... BAKERSFIELDISM: From reader Terry Willey: "You know you're from Bakersfield when someone mentions a 'bluff' and you don't think of poker."
Posted by Richard Beene at 11:20 AM