* ... ALMOND DEMAND: Good news for our local almond growers. According to The New York Times, China is now the top foreign buyer of American almonds, "more than doubling its purchases from two years ago." That's according to the California Almond Board of California, which is launching an aggressive marketing campaign directed straight at the Chinese consumer. The Times said China purchased $737 million in tree nuts from the United States last year, a huge increase from the $89 million it spent just five years earlier. The California Almond Board is now spending $3.3 million to market our almonds to the Chinese consumer. The paper said Chinese consumers tend to buy nuts roasted, salted and in the shell.

* ... HEAT IS ON: Where were you when Mother Nature snapped her fingers and ordered in the heat? I could almost pinpoint the time when I felt the end of our long happy period of mild weather. It was Sunday, around 10:30 a.m. and I was on a bike, out near Zerker Road and Porterville Highway, when I felt the full rush of a hot wind and knew instantly that summer was here. 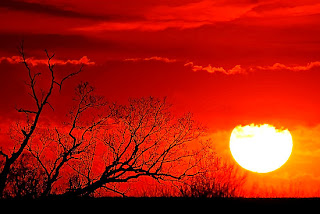 * ... REMEMBERING ALTON: Hard to believe it's been a full year since a motorist struck and killed Alton Saceaux. Alton was one of our community's true great spirits and a committed recreational cyclist. He was cycling home on South Union Avenue when he was struck and killed. (see a previous post here) His friends planned a twilight ride in his memory. 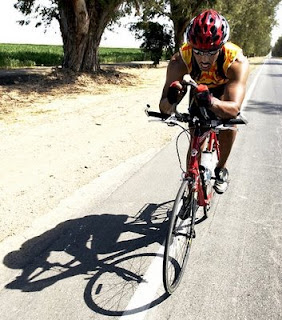 * ... HIGHLAND ENGINEERS: It's not often that you hear of an entire family of engineers, but reader Randy Airey reminded me of at least one. He said his aunt, Marcelle Ansolabehere, is married to retired civil engineer George Ansolabehere. They have three daughters and all of them are civil engineers, and all went to Highland High. Monique finished at the top of her class at USC in 1985, Helene graduated from Cal Poly in 1988 and Denise also went to Cal Poly, graduating in 1990. Denise finished a masters in civil engineering in 2000 and Helene is working writing her Doctorate Dissertation from UCSB and will have a PhD is civil engineering. The girls have a brother, Tony, who graduated from USC in computer science. Wow.

* ... POWER COUPLE: Heard that Betty Eaves is the incoming president of the Assistance League, one of the more prominent charities in town. Apparently this is Betty's second stint as president of the AL. She is married to Ron Eaves, the chairman of the board at the Golden Empire Gleaners, another important local charity. This is one couple who chooses to give back to their community. (Betty shown below in photo taken by Casey Christie) 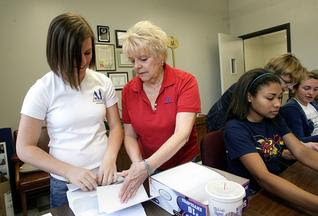 * ... MEA CULPA: I goofed on Monday in referring to Siobhan O'Rourke as a "he." As reader Michelle Beck noted: "Lovely mention for Siobhan O'Rourke, but I wanted to mention that she is a she, not a he. Her name is Irish and is pronounced 'Sha-vaughn.' My dad and her dad have been friends for years. She is a great kid and deserved the recognition." Siobhan received a scholarship from the National Multiple Sclerosis Society and plans to enter the nursing program at Cal State Bakersfield. She graduated from Bakersfield Christian High School.

* ... BAKERSFIELDISM: You know you're from Bakersfield if you "know Thursday night is steak night at Narducci's. Ten bucks for a steak and the set up."
Posted by Richard Beene at 11:24 AM

Alton was a great guy. He always had a smile and loved to ride. We all miss him.

Hey, Mr. Randy Ariey just an FYI on the Ansolabehere family. Monique is married to Joe Roberts an engineer, Helen is married to Troy Finger another engineer and Denise is married to Thomas Hartline who has two master’s degrees one in construction and the other in business. Oh, and you left out your Aunt Marcelle who after birthing the power house of nerds, received her master’s degree in education. Talk about an imitation complex. Theresa (Tony’s wife) Ansolabehere