Who's living in that empty house next door? And looks like Dick's Sporting Goods is coming to Bako

* ... THE BUM NEXT DOOR: How'd you like to have a vagrant living in the empty home next door? That's exactly what happened to a friend of mine in one of the nicer neighborhoods in our town. The house had been foreclosed and my friend spent her time keeping its yard tidy. One day, she and her husband noticed the back door open, went to close it, and found the thermostat set at 66. The empty home's Realtor later told her a vagrant had been living in the house, happily using its electricity and enjoying a roof over his head. A long recession and thousands of empty homes can spell trouble. This story ended happily: the house has sold and a new family is moving in.

* ... SCHOLARSHIPS: Kudos to two high-achieving local kids who received scholarships from the National Multiple Sclerosis Society to go to college. Frontier High's Paige Brock and Bakersfield Christian's Siobhan O'Rourke were among 300 lucky students from across the country to receive money to help with school expenses. Brock was diagnosed with MS just before her 17th birthday and has since shown a strong, positive attitude. She'll receive $1,000 and plans on attending Cal State Bakersfield's nursing program. She hopes to become a labor and delivery nurse. O'Rourke said her mother was diagnosed eight years ago, throwing her into a new role at home. She received $2,500 and will attend Biola University in La Mirada to major in English. She hopes to either teach English or write. Hats off to both of these kids.

* ... GLEN'S TAKE?: From reader Glen Worrell: "You know you're a Bakersfield old timer when Ray and Joan Dezember's daughter (Becky, I hope!) was in the fourth grade at Caroline Harris School where I was principal in 1965. She was more than great in the standing broad jump (9 feet plus?) I came to Bakersfield in 1937 and I'll have one of his 'I Love Bakersfield' stickers if I get there before they are gone!"

* ... FLIES BE GONE: A number of readers wrote with the same remedy to rid my side yard of pesky flies. The solution: put several pennies in plastic bags, fill them with water and hang them around the yard. "I was amazed and happy as they were driving us all inside. Worth a shot and cheap to boot!" Lynn Bailey said. John Rodenburg said the reflection/prism effect of the water-filled bags, along with the pennies, scares the flies. "We tried it a few days ago since flies like to feast of our hygienically-challenged pug this time of year. It appears to be working like a charm!" he said.


* ... THE BUZZ: So what will come of the mess that befallen county Supervisor Michael Rubio, who up until a few days ago was a shoo-in to become the new state senator from the 16th District? Problem is, he doesn't live in the 16th Senate District but rather the 18th District. This is clearly not Rubio's fault since he has been voting in the 16th District and registered there. (the boundary is just yards down the road) It was a problem caused by the county elections office, and if someone officially challenges Rubio's ability to represent the district, he may be disqualified to run. Rubio is one of our community's rising young stars, but this legal snafu would derail his meteoric rise, at least temporarily. 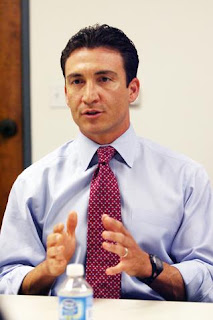 * ... OVERHEARD: It appears that Dick's Sporting Goods, another national chain, may be coming to Bakersfield. Workers are busy remodeling the inside of the old Linens 'n Things at the Northwest Promenade and someone spotted blueprints from Dick's. No official word but appears we have a new business in town.

* ... BAKERSFIELDISM:  You know you're a Bakersfield old-timer if  "you remember the teletype machine in the lobby of the Padre Hotel and know why it was there. (So the horse players in the bar could get the race results."