It's that time of week to hear from Rep. Kevin McCarthy (R-Bakersfield) to get his view of the week on Capitol Hill. In his words:

"This week marked the 60th Anniversary of the Korean War and on Capitol Hill there was a ceremony recognizing the great many sacrifices our nations’ veterans made during the war. Attached is a picture of the ceremony.

"Threats to our national security still exist today.  This week the House passed a bill of which I am a cosponsor that will protect our nation.  The Comprehensive Iran Sanctions, Accountability and Divestment Act (H.R. 2194) is designed to stop the Iranian regime from continuing to pursue nuclear weapons along with sponsoring terrorism in other countries by imposing harsher economic sanctions.  I also joined other members yesterday in writing a letter to the President calling on him to immediately enforce these sanctions to make this legislation successful.  Also on the legislative front, I cosponsored two other commonsense, good-government bills.  The first one, H.R. 5016, would help secure our borders by prohibiting Federal land agencies (i.e. Forest Service, National Park Service, BLM) from using environmental policies to block the Border Patrol from securing the border on public lands that adjoin it.  The second bill is H.R. 5529, the Children of Fallen Warriors AMT Relief Act.  This bill would prevent the survivor benefits children receive if a parent is killed while on active military duty from being subject to the punitive Alternative Minimum Tax.  These children’s parents made the ultimate sacrifice for their country, and the survivor benefits they are entitled to ought not to be taxed at the exorbitant AMT rate. 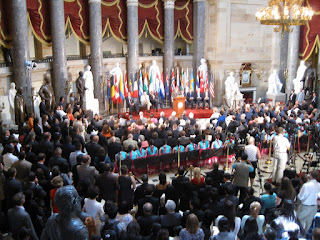 "Looking at our state unemployment, I know that families and small businesses are working hard to make ends meet during these challenging times. Washington can’t seem to operate with the same sense of urgency.  This week House majority leaders announced that they would not be offering a budget for the Federal government this year, the first time since 1974.   Hard working Americans have had to make
tough budget choices, and Washington must do the same.  Not passing a budget is like going on a road trip but never looking at a map. Americans deserve better and our children deserve better.
"The good news is that there are tools being utilized by Americans to tell Washington which direction our country should go. AmericaSpeakingOut.com continues to grow with new account users and ideas that will be incorporated into a new governing agenda for the next Congress; please join the discussion if you have not already. YouCut also continues to grow rapidly. Passing the 1 million vote mark this week, people voted to bar new funding for an expansion of the IRS for the enforcement of the new individual health care mandate under the new health care law that continues to not live up to its promises of lowering costs, reducing the deficit, and protecting seniors’ benefits.
Cutting this funding expansion would save us between $5 and $10 billion and once again, I joined Republicans and Democrats in voting for this spending cut.  Unfortunately it did not pass with the final vote being 243 to 181.  To vote next week, visit: http://republicanwhip.house.gov/YouCut.
Posted by Richard Beene at 3:44 PM