* ... LOCK YOUR DOORS: A friend of mine who lives downtown on Cedar Street returned from dinner last Friday to find her house ransacked. Her loss: two computers, a flat-screen TV, a few incidentals and her sense of safety and security in her own home. Two Bakersfield police officers told her the downtown-Westchester area was getting regularly popped by burglaries, so take this as a reminder to keep your doors and windows locked and turn on your alarm. And if you think alarms are expensive, think again. Each burglary they prevent or interupt pays for the cost of installation and service. Police will tell you this stuff is happening all over town as the economy worsens and our underachieving youth are out of school and on the streets.

* ... ICONIC BAKO: You don't have to be an art aficionado to appreciate some of the screen prints that are on display at the Padre Hotel by local artist Larry Jason. The prints depict some of our community's  iconic places, including Luigi's, the Alley Cat bar, the old Bakersfield "sun, fun, stay play" welcome sign on Highway 99 and of course the Padre Hotel itself. A reception honoring Larry Jason is being hosted by Metro Galleries and the Padre and will run from 5:30 a.m. to 8 p.m. Thursday in The Farmacy at the Padre. If you can't make the reception, the art will be hanging through the first of August. 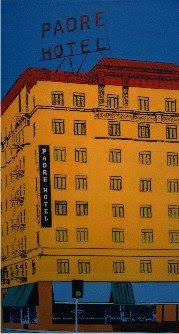 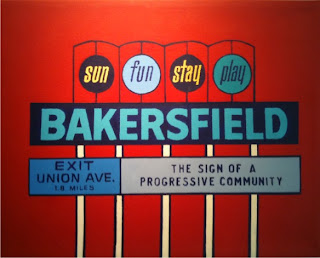 * ... IN INDIA: Reader Doris Winham wrote with pride to report that her grand-daughter, Taylor Witcher-Page, is with a group from Valley Christian Center in Madera working with disadvantaged children in India. The group is working with Sarah's Covenant Homes, an orphanage for kids with special needs, in Ongole, India.

* ... OOPS: Retired school superintendent Al Sandrini corrected me for misidentifying him in an earlier post regarding the location of the old Coachlight Inn. "You may find this hard to believe, but there are two Al Sandrinis in Bakersfield. My cousin, Alan Sandrini and I (Alvin) both go by Al and you are not the first to confuse which of the cousins with whom you might be dealing.  Al(an) and I both came from 'farmer families' south of Bakersfield. He was the long time owner of B and F Hobby Shops on Baker Street and more recently, worked with his son Bryan as the host for Sandrini’s restaurant downtown. He currently is working at Sundale Golf Course in Kern City as the assistant pro while I continue to work on lowering my handicap! Since retiring from Norris ten years ago, I’ve worked as an educational consultant, thus proving to my wife what she already knew, I flunked retirement! Finally, all that stuff about the Coachlight Inn Al told you about was true…I think…at my age it’s hard to remember!! Have a great day." My apologies to both the Al Sandrinis.
* ... MORE COACHLIGHT: Additional recollections about the old Coachlight Inn from reader Milt Huggs, who should know something about the subject. "Jack Ewing's Stockdale Inn, located on the corner of Stockdale Highway and California Avenue/New Stine, was purchased by Milt Huggs and a group of investors in 1971. The building was sawed in half and moved to the corner of California and Oak Street, the former site of the Santa Fe Railroad Roundhouse. The two halves were placed over a vintage red caboose and reassembled.  The red caboose then became the lively centerpiece of the dinning room in a restaurant remodeled to look like an old train station. An old green Pullman Car was placed on tracks in front of building for future dining.  The remodeled restaurant was named the Iron Horse. The Iron Horse became the meeting place for the newly charted West (is best) Rotary Club. Al Sandrini and Milt Huggs are still members of the West Rotary Club. In 1978, the restaurant was sold to Gilbert Burns and it became a disco. A few years later Burns sold to the owners of the Coachlight Inn. They closed their Union Avenue and 34th Street location and moved to California Avenue and Oak Street.  The location is now a strip mall. While I have the chance I might as well toot my own horn. Milt Huggs is in the restaurant business with his son Mark Huggs. Milts Coffee Shop at Olive Drive and Freeway 99 for 46 years and the 24th Street Cafe for 25 years."

* ... BAKERSFIELDISM: You know you're from Bakersfield if "you remember the name of the country western singer who was tried and convicted in Bakersfield of murdering his wife. (Spade Cooley)

Possiblly not so much that the crime problem is " our underachieving youth are out of school and on the streets," as it is people trying to fund their drug habits. Apparently, it's a bit difficult to hold down a job while keeping up a serious substance abuse practice.