* ... PUBLIC PENSIONS: Reader Stephen A. Montgomery added this thoughtful addition to the commentary on those rich public pensions. "All the discussion about pensions in Bakersfield seems to miss one important point," he said. "Contracts allowing retirement at age 50 are depriving citizens the experience and skill of people who have reached the peak of their productivity. We've traded experience and skill for 10 years or so of added expense that gets us nothing. No wonder our roads are crumbling."

* ... SPOTTED: A lone diaper sitting in the middle of 21st Street near Elm Street, obviously discarded by a contemptuous driver or passenger. Thanks to my friend Diego for passing along this latest bit of bad behavior. 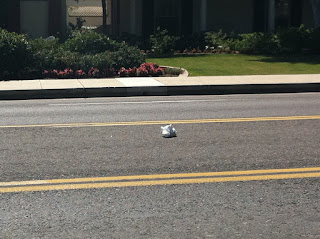 * WEATHER BIRD: Reader Geraldine Sproul wrote that she too remembers the old weather bird sign that sat on the roof of the Sill Building at Chester Avenue and 18th Street. "It advertised Coca-Cola... As I recall it survived the earthquake of 1952 very well. Must have been put up well."


* ... SAM THE HIPPO: Reader Jeffrey Williams wrote to say he too remembers a hippopotamus named Sam who lived at the old Larson's Dairy. "I remember Sam the Hippo at Larsons in the late 1960s or early 1970s.  I believe some people were trying to get a zoo started in Bakersfield and bought him to try to raise interest and money.  If my memory is correct he was in a corral about 15  square feet and about 2 feet deep in mud...  it was not attractive.  Today I'm sure someone would be arrested for keeping an animal in those conditions. I recall my dentist at that time, Dr. Richard Wolfson (whose ultra modern office building at 21st and E street was very cool) had a lot of 'Sam the Hippo' info and trinkets in his building; maybe he was one of the leaders of the effort."
* ... MORE SAM: Another reader, Shauna Rockwell, remembers going with her grandparents to Larson's to buy milk in one-gallon bottles. "I always liked to go with them so I could see Sam the Hippo. Larson's was a drive-through dairy and as you would drive into the line, there was a pool and Sam just to the side of that line. In grammar school they always served little pints of Larson's milk. Later in my teen years it was also a great place to go see all the cute boys in their white 'dairy' suits selling milk and ice cream. Man... those were the days!"

* ... BAKERSFIELDISM: You know you're a Bakersfield old-timer if you "collected pollywogs in the East Side Canal."

I'm sending a link to an image of the old Coca Cola weather sign.