* ... ELECTION DAY: If you are like me you've grown weary of the mud slinging and political attack ads that have come to be the norm in a political season. Instead of a sober examination of the issues, character assassination seems to be the preferred method of framing one's campaign. Still, every vote is important and this promises to be an historic election. So get out an vote on Tuesday.

* ... MORE CSUB: Received a note from reader V. Kretsinger who chastised me for allegedly blaming campus security for the death of 18-year-old Bianca Jackson on the campus of Cal State Bakersfield. For the record, I never blamed campus security but rather questioned the wisdom of having a policy that allows late night parties at the campus. Regardless, here is Kretsinger's take. He said "the blame lies with the 75 students who invited all their friends who shouldn't have been invited and they invited their friends." Good point, but certainly the administration should realize that's how these things work, and they shouldn't be surprised if large crowds show up when parties are hosted on campus.

* ... FATAL CRASH: A Sonoma County judge has upheld a 13-year prison sentence on a woman who was involved in a drunken driving crash that claimed the life of former Bakersfield resident Kathy O'Daniel. The 54-year-old O'Daniel was killed in September of 2009 when a car driven  by Judy Shafer slammed into her Honda Civic on a rural road. Kathy, her husband Chuck and their five children lived in Bakersfield for years before moving to Northern California. Chuck O'Daniel was the manager of the old Harris Department Store at East Hills Mall and later served as advertising director for The Californian.

* ... COLLARDS: Hard to beat the spectacular weather on Sunday. Clear and crisp and the best of a Bakersfield fall. On Saturday I stopped by the downtown farmer's market off F Street and it was bustling with folks buying fresh winter greens. There were collards, kale, turnips, green and yellow squash, spinach, cauliflower, apples, nuts, honey, beautiful fresh flowers and of course pumpkins. All this abundance while an acoustic folk country band provided a soothing backdrop to a wonderful fall morning. 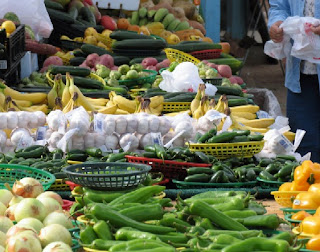 * ... WREATH LAYING: If you haven't been out to the relatively new Bakersfield National Veteran's Cemetery, it's worth the trip. Located off Highway 58, it's on land donated by the Tejon Ranch Co. and now is home to 780 veterans. Recently I heard from Adoree Roberson that Bakersfield Breakfast Rotary is participating in the "Wreaths Across America" event in which wreaths are placed on all veterans' graves across our country. This year it falls on December 11. If you'd like to buy a wreath in honor of a veteran, living or dead, go the website www.bakersfieldwreathproject.org.

* ... BAKERSFIELDISM: From reader Jo Lynn Moralez:  "You know you're from Bakersfield if you remember, in the 1960s, bomb shelters being sold at the corner of Baker and Niles streets."
Posted by Richard Beene at 9:52 AM