* ... SAN JOAQUIN: Hard to believe it's been almost a full year since San Joaquin Bank was shut down by federal and state regulators. It was October 16, 2010, when a dozen or so regulators in dark suits swept into the bank at the end of the day and closed it forever. So far this year, the FDIC has shuttered 129 banks, well on track to eclipse the 140 closed last year. Since the financial crisis started in 2007, 297 banks have been closed, bringing the loss to the FDIC Deposit Insurance Fund to $72.6 billion. Most of the employees and executives at San Joaquin have landed jobs elsewhere and as time marches on, the bank and its considerable imprint it left on this community become little more than a curious and sad historical footnote.

* ... SPOTTED: Former New York Mayor Rudy Giuliani, one of the speakers at the Bakersfield Business Conference, was seen playing golf at Seven Oaks Country Club on Sunday. Sheri Horn Bunk, head of the Taft College Foundation, and friend Mary King spotted Giuliani playing behind them and stopped to pose for a few pictures. Said Sheri: "We drove back to the hole where he was finishing up his putt and acted like we had lost a club. And I said to the body guard who was a bit like a Sopranos character, 'that man looks like Rudy Giuliani' and he said it is. Rudy walks over with cigar in tow and says 'hello ladies!' We took the picture and both Mary and I said 'can we post it to Facebook?' And he said 'yes please do!' We all cracked up and he continued to play behind us. He also signed two scorecards for us and personalized them too." 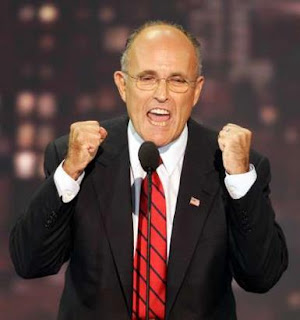 * ... VALLEY FEVER: Local civic leader Sheryl Barbich wrote in with a warning to folks who are new to our community and are not familiar with Valley Fever. Said Sheryl: "Your comment about (Ralph) Bailey reminded me that Soraya Coley, Provost at CSUB, has one of the stories that people traveling through here need to know. She and her husband were recently vacationing in Hawaii when he suddenly got sick. Of course, no one there knew anything about Valley Fever, so they tried all kinds of TB tests, etc.  Fortunately, Soraya phoned Dr. (Horace) Mitchell who suggested that it might be Valley Fever. Sure enough! With input from Dr. Royce Johnson, her husband wound up in the hospital at UC San Francisco.  He only recently went back to work part time.  I’ve heard stories (Pauline Larwood and Sandy Larson) about people visiting from other countries/states, who got sick when they went home, were not diagnosed properly, and ultimately died." That's sound advice.


* ... NIGHT WALK: Reader Lynn Finch reminded me of the Light the Night Walk this Saturday, a fund raiser for the Leukemia and Lymphoma Society, whose mission is to find a cure for the blood cancers. This is a worthy effort and the event will be held at the Marketplace on Saturday starting at 5 p.m. with the walk following at 7 p.m. Lynn's own son, Chad Hathaway, is an 11-year survivor. He had leukemia and underwent a bone marrow transplant from an unrelated donor. My own mother, Julia Squier of Scottsdale, Arizona, died of lymphoma two years ago.

* ... YMCA: From Dave Wilkerson of the YMCA: "Just wanted to let you know that thanks to Kari Grimm-Anderson and Grimmway Farms the YMCA for the first time ever has programs for the kids in the Arvin-Lamont area. Grimmway is paying half the cost per child, paying for uniforms, soccer field etc. What a blessing this is for the kids in this area of Kern County."

* ... OPEN HOUSE: Remember the open house for prospective students at Garces Memorial High School is this Sunday from 11 a.m. to 2 p.m.

* ... BAKERSFIELDISM: From reader and All-America skeet shooter Ken Barnes: You know you're a Bakersfield old-timer if you "remember buying two hamburgers, fries and a small drink for 60 cents at the Jumbo drive-in on Golden State Avenue. Or, if you were one of the kids who shot arrows into the Big Indian I put up at my tire store on the Garces Circle."
Posted by Richard Beene at 11:08 AM