* ... BLACK FRIDAY: The early reports from local retailers after Black Friday were encouraging. The crowds were out and folks were spending again like the good old days. It's clear our economy cannot get back on track until consumers have the confidence to spend, so while this is early, it is certainly encouraging. And I was amazed to learn of one woman's sojourn on Black Friday. Shanan Mallard, a Human Resources specialist at The Californian, began her shopping at 7:30 p.m. Thursday and didn't end until 4:30 p.m. Friday. That's a 21-hour grind that took her to Wal-Mart, Best Buy, ToysRUs, Target (every one in town) and multiple trips to Valley Plaza. Now that's commitment. 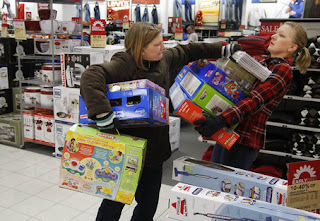 * ... KUDOS: Congratulations to Sam Ames, the popular and super-fit manager of Action Sports over on Brimhall and Calloway. Ames won the state cyclocross championship in the Master's Elite Division (40-44 age group) in Glendale last weekend. His next challenge will come at Hart Park in the Northern versus Southern California Cyclocross Championships on Sunday, January 16. This event is hosted by Ames and the Kern Wheelmen Bicycle Club. Ames and his wife Andrea have two children and live on the east side of town. She is a teacher at Old River Elementary. (Ames shown below along with wife Andrea (right) and friend Betsy Ramsey.) 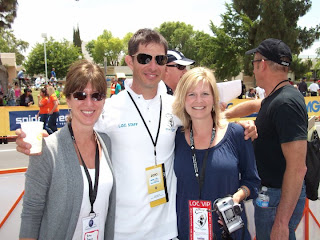 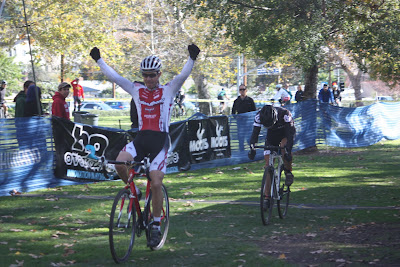 * ... RED CYCLES: Heard from several readers who answered Evelyn Johnson's query if anyone  remembered when Bakersfield police motorcycles were painted red. Said Bob Schilly: "As a student at KCUHS (Kern County Union High School) in the mid to late 1940s we observed the Bakersfield police cruising the streets around the campus on their red motorcycles.  We later saw that they were missing for a few days and then when we next saw them they were painted black and white. We later learned that this was due to a local attorney being cited for speeding who contested the ticket and won because the California Vehicle Code required that vehicles used primarily to enforce the Vehicle Code must be painted black and white.  It is interesting to note that he did not say he was not speeding however."

* ... MORE CYCLES: And reader Jack Kelley added this: "Sheriff Tom Kelley rode a red motorcycle when he stopped me and chewed me out for not stopping at a stop sign at Baker and Flower Street in 1945... I was a student at East Bakersfield High School. My mother was a resident of the great town of Fellows and her father was John Going... thanks Evelyn Johnson for the memories."


* ... RILEY'S TAKE: And finally, Riley Parker affirmed that "Evelyn’s memory is quite clear... The officers wore khaki tan shirts and medium brown trousers, soft caps and communicated with the dispatcher using call boxes that were located throughout the city. When I walked the foot beat on Baker Street in 1969, I used the call boxes that were mounted on the north side of the McMahan’s furniture on Baker Street, and in the alley south of Sumner Street, east of Baker Street on the wall of what is now the Arizona Café. It was the Chinese Kitchen at that time and was operated by Raymond Louie."
* ... 4-H: One group that never gets enough publicity is the 4-H Club, so I am happy to pass this along from Teri Filkins, community service project lead for the Stockdale West 4-H Club. The club is partnering with Houchin Community Blood Bank and holding a blood drive on Thursday, December 9, from 5 p.m. until 8 p.m. There will be light appetizers and other refreshments for donors. Interested? Call 661-588-8321 for details.