Is the San Joaquin Valley Air Pollution Control Board out of control? One businessman thinks it is ...

* ... AIR BOARD: The backlash against the San Joaquin Valley Air Pollution Control District continues. If you recall, the air district came down hard on the annual Thanksgiving Day "Pie Run" because - brace yourself here - the runners had the audacity to have a small bonfire to warm themselves after the run. I am now beginning to hear from others, business people, who share similar stories. Gordon Cantrell, manager of Electrical Motor Works off 21st Street, wrote in with another story that smacks of heavy-handed APCD tactics. "We were recently fined (actually, it was just a request for funds) for 'violations' of our permits to operate. In the so-called violations, it indicated that we used spray cans to paint our motors. In our permits, it indicates that we may use non approved methods of painting only for touch up and repair items. This means small areas that need to be touched. This is exactly what we have done in the past. In the 'violation' there was no proof of any date, no color, no amount sprayed, nothing to indicate that anyone had seen anything at all, just a simple fact that we purchase spray paint was the only evidence submitted.... We are very careful to comply with the laws and rules set forth legally.... It's very difficult to fight the government, but when it comes to the government misusing its authority, I believe we should all stand up together and just say NO." Bonfires and spray cans. In this economy, and at a time when we should be helping small business, this is what the Air District does with its time?

* ... BRAINPOWER: Bakersfield showed up on another listof dubious distinction the other day, and it's not the kind of publicity we need. According to the Huffington Post, Portfolio ranked 200 cities in terms of "brain power," calculated by earnings and educational achievement. And you guessed it, we made the list of the ten "least brainy" cities in America. Merced topped the list, followed  by McAllen, Tx., Brownsville, Tx., Visalia, Bakersfield, Yakima, Wash., Laredo, Tx., Hickory, N.C., Fort Smith, Ark., and Modesto. Not surprisingly the top five smartest cities in America were all college towns: Boulder, Ann Arbor, Washington, D.C., Durham, N.C. and Fort Collins, Co.

*  CIOPPINO: It was good to hear from Barry Rosenfeld that the we have a date for the Bakersfield West Rotary's 18th annual Cioppino Feed: Saturday, March 26. I attend a lot of fund raisers in town and without a doubt this is my favorite. (The St. Frances Parish School's Crabfest is a close second) Cioppino feed combines an informal night of catching up with your friends while enjoying a hearty meal of clams and cioppino over at Garces High's Leddy Hall. If you haven't been, this is the time to start. Ticket prices will remain at $75 and West Rotary is looking for sponsorships and auction items. For more information call chairperson Angie Paquette at 661-617-3217. 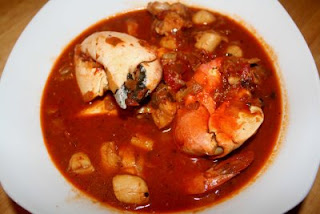 * ... MEMORIES: Carl Bryan wrote to remember 1953, the year after the great earthquake. "We lived in a two-story house at 1724 Camino Primavera (near East High), and I turned eight that June (between my second and third grade years at Horace Mann School). Several times that spring and summer my father woke me up in the very early morning hours so that we could sit in what we called the sun room to wait for a big flash in the east. We now know these as the Operation Upshot-Knothole, U.S. Nuclear Tests at the Nevada Proving Ground, and they were apparently well publicized. The other event of that year that I remember very clearly was the first test pattern broadcast on KAFY-TV, which became KBAK-TV soon after. Our family had often visited Uncle Bill and Aunt Sally on Ray Street in Oildale to watch Los Angeles KTLA-TV (the Spade Cooley show, Roller Derby, and wrestling from the Olympic Auditorium) via a huge antenna on a very tall roof tower that blew over several times each year.  I seem to remember that the test pattern included a drawing of the Father Garces Statue."

* ... INTERNMENT CAMP: Joyce M. Collins dropped me a nice note about a dark green produce stand that stood near the intersection of Golden State Highway and Union Avenue. "It suddenly became empty in 1943 when the couple that ran it were sent to a Japanese internment camp." Anyone recall their names?
* ... BAKERSFIELDISM: You know you're a Bakersfield old-timer if you "recall the days of very small kitchen ovens when people used to have their turkeys roasted at bakeries like Cottage Bakery across from the old Williams School on Niles Street.

Posted by Richard Beene at 4:08 PM

I was afraid the Air Police would have shut down the Lamp Lighter Tour at the museum on Saturday. There were small bonfires and kerosene lanterns burning. Saturday could have also been a "no burn" day. Yikes. Hopefully the museum made some money without having to pay a fine.