One man's success story in the middle of a recession, and more bad form involving people and their cell phones

* ... SUCCESS: Here's my feel-good story of the day. This one comes from Tom Myers, a 1996 graduate of Cal State Bakersfield who has certainly had his share of ups and downs in this economy. After graduating, Myers worked for 10 years with First American Title Co. before leaving to try his hand at real estate development. He got caught up in the real estate crash and "ended up shooting myself in the foot after the project failed. A month after I left the land development firm, I went to an interview with Farmers Insurance to look into becoming an independent self-employed agent. Needless to say, I will have finished my fourth year at the beginning of March 2011 and even though it has been a struggle, I have managed to start a business in a down economy without so much as taking a single penny from unemployment or charity. This is not to say that both have value and there are people deserving of it, but to point out if you give a man a fish he'll eat for a day. Teach him to fish, he'll eat for a lifetime. Perhaps it's time that we start teaching others to fish." And by he way, Myers was named 2008 Career Agent of the Year at Farmers.

* ... BAD FORM: What is it about cell phones that turns people into such inconsiderate dolts? Anthony Meeks, lease manager for Lamar Advertising, was at Russo's Books the other night to hear former Secret Service agent Clint Hill talk when a man in the audience received a call on his cell phone. "Apparently he felt the call was important enough to take, but he didn't have the common courtesy to excuse himself so the others could hear Agent Hill. I am no longer amazed at people's disrespect of others, especially on their phones, but even this surprised me. I would assume that to be sitting in the front means he arrived early and has a genuine interest in the subject, but even that wasn't enough for him to go a few minutes without contact from the outside world." Good grief.

* ... OVERHEARD: A man in my peer group casually mentioning that he was diagnosed with a "mega colon" following his first colonoscopy. What does it say when men of a certain age in Bakersfield all know gastroenterologist Dr. Rabinder Bhogal on a first name basis?

* ... KELEHER'S COOKIES: Received a nice note the other day from local artist Barbara Reid, who wanted to share a story about a special brand of holiday cookies. Turns out the family that owns and operates Keleher Shorthand Reporters makes cookies for its clients every holiday season. "Every year my family has looked forward to a plate of home-baked deliciousness from the Keleher kitchen," Reid said. Jean Keleher is a graduate of North High and now a member of East Rotary. Reid described her as "one of the hardest working and nicest home grown ladies I know." 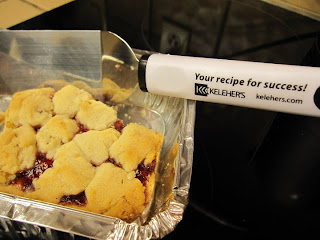 * ... BIG-TIME SPORTS: Now that Cal State Bakersfield has gone Division 1 in sports, we're starting to see some big-time schools put Bakersfield on their travel schedules. The University of Colorado will be in town on Jan. 2 to play the Runners in basketball, and in March the Runners will host The Ohio State University baseball team at Hardt Field.

* ... BAKERSFIELDISM: Another one from reader Jack Kelley: You know you're a Bakersfield old-timer if you "remember when the Bakersfield Hospital was located at the northwest corner of 19th and R Street, by Central Park. I had my tonsils removed there by Dr. Joe Smith in 1935."
Posted by Richard Beene at 11:11 AM