Should the presence of freshly paroled prisoners make us nervous? And is the NRA responsible for the Tucson shootings?

* ... EX CONS: There are few bigger fans of columnist Valerie Schultz than me, but even friends can disagree. Valerie, who writes an often poignant, insightful lifestyle column for The Californian, took me to task last week for voicing the fears of many when busloads of freshly paroled ex-cons show up at the downtown bus station. She advised prayer and a little sensitivity and said even blog entries can "damage a person's fledgling hopes." First, I both work and live downtown, so I confess being a tad more sensitive than the average Joe when groups of parolees are dumped downtown and fade into the adjacent residential neighborhood. And yes, I'm all for prayer and this is a nation of second chances. But the hard truth is that California's recidivism rate is 70 percent - the highest in the nation - meaning that seven out of every 10 parolees who walk out of that bus station will end up back behind bars. Can you imagine the outcry if these guys were being released at The Marketplace? Or Seven Oaks? Or near Riverlakes? As a friend told me last Friday; "A friend of mine who works for Probations told me if the public knew the backgrounds of the people they are paroling because of overcrowding, there would be a revolution." It's time to relocate the bus station to a less intrusive area. (photo from movie 'Sin Nombre') 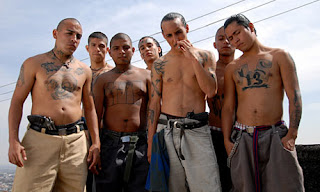 * ... NRA HEAT: I also took some heat from reader Robin Walters, who was incredulous that I would publicize an upcoming fund raiser for the National  Rifle Association (NRA). "Are you serious?" Walters wrote. "Encourage a 'fun' dinner to support the ability of anyone to carry a 30-round clip for their Glock to public meetings and places where people congregate." I concede our nation is on edge after the Tucson shooting, but Walters is clearly off target (no pun intended) here. First, 30-round clips like the kind used in Tucson are illegal in California but more important, it's an insult and a cheap shot born of ignorance to compare people who enjoy the shooting sports to some wing nut who opened fire on a crowd of innocents. Robin:  I'd be happy to buy you a ticket to the NRA dinner, set for February 4, so you can meet some of our community's  most decent and honorable people.

* ... GOOD DEED: Health care professional Darlyn Baker wrote to talk about an unexpected good deed. In her words:  "After reading what you wrote about Mimi Audelo's Starbucks' experience in today's paper, I wanted to share with you an act of kindness bestowed upon me by a perfect stranger. Last week I was at the drive through Starbucks on Oswell.  It was taking a very long time for the car in front of me to leave.  I see the driver and the employee pleasantly chatting as if no one else was in line.  By now there were five cars behind me.  The driver soon leans out of her window and with a big smile hollers to me, 'I'm sorry.  It's not my fault.  I only bought two drinks but they made them wrong.'  Finally she leaves.  When I go to pay, the employee says, 'She paid for yours!'  I was truly humbled and my emotion changed from annoyance to gratitude.  How nice that was of her.  I will never forget her nice gesture.  She has inspired me to do the same."
* ... DID YOU KNOW? Did you know that the first studio for KERO-TV 23 (then Channel 10) was the ballroom at the old Hotel El Tejon where the Bank of America tower is now located?

* ... STONES: From local political consultant Gene Tackett: "Old timer? No way. But I did see the Rolling Stones play the Civic (auditorium) in August 1966. I got lots of satisfaction!"

* ... BAKERSFIELDISM: You know you're from Bakersfield when you always thankful if there's water in your river.
Posted by Richard Beene at 12:52 PM

Not all parolees arrive in Bakersfield on the bus. Care to check out the Amtrak station? And how does anyone propose to relocate that?

If the Amtrak station were in a residential area you might hear sometime....

Thank you for having sense regarding the NRA. Please let us know if Ms. Walters takes you up on your offer.