* ... THE RIVER: Funny how having water in our river changes our view of things. Jerry Kirkland composed this valentine to the great Kern River following a morning walk. "I walked to the center of the river bridge on Calloway and, gazing to the east, was awestruck by the beauty - the rare beauty - of the Kern River in its approach and then as it passed swiftly beneath me. To see it running from bank to bank, behaving just as nature intended, served to elevate my spirits. Had the sun been out, it surely would have found my heart. Odd, isn't it, that such experiences make it seem that, for the moment at least, all is right with the world - even the sign that warns, 'No diving from the bridge.'" 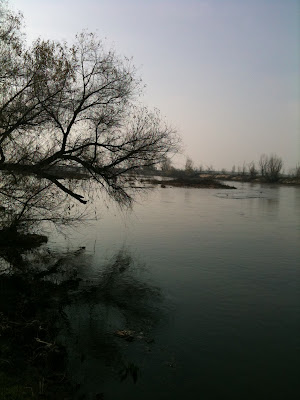 * ... OLD BANK: Longtime local businessman John Brock Jr. wrote to clear up an earlier post about the Kern Valley Bank, which was destroyed in the great fire of 1889. Brock said the bank was organized in late 1873 and opened for business the next year. "Business was so good that they erected a single-story wood building at the southwest corner of Chester Avenue and 18th Street and moved into it in 1874. They remained in this building until deciding to erect a two-story brick building on the same corner in 1888.... they either opened just before or were scheduled to open in the new building when the fire of July 7, 1889, destroyed the building and most of the town."

* ... HUMANITARIAN: Richard "Dick" Cook, the North High and USC graduate who went on to become chairman of the Walt Disney Studios, has been named 2011 Pioneer of the Year by the Will Rogers Motion Pictures Foundation. This is quite the honor, and he joins a distinguished group of past honorees that include the likes of Cecil B. DeMille, Jack Warner, Jack Valenti, Darryl F. Zanuck and Sumner Redstone. His sister, Joy Tolladay, told me her brother was being honored as a humanitarian, philanthropist and entertainment industry legend. Said Joy: "He is in pretty good company for a guy born and raised in Bakersfield that began his career as a ride operator at Disneyland."

* ... DID YOU KNOW? Did you know that at the end of World War II, there were some 425,000 German and Italian prisoners of war at some 500 camps across the United States? Reader Fred McCaa wrote that he remembers hauling potatoes near Arvin and the field workers who loaded his truck were German war prisoners.

* ... BAKERSFIELDISM: You know you're from Bakersfield if "you remember the old Buttonwillow train ride, circa 1958-59. It went from Bakersfield to Buttonwillow and I believe they even staged a fake train robbery." Thanks to reader Timothy J. Sill who contributed this. He wonders if anyone knows why the ride ended.

Don't know if the current state of the Kern River is how nature intended. Some of that water is coming from far away places brought to you for your dreamy enjoyment by MAN.