* ... STEVE LOYD: Nice to see Bakersfield Jet Center, formerly Loyd's Aviation, receive a glowing review in the National Air Transportation's quarterly journal. The Jet Center is owned by Steve and Pat Loyd, whose smiling faces grace the cover of Aviation Business Journal. The Loyds, both of whom are deeply involved in our community, more than tripled their space by expanding into new quarters and did so with the help of one of their daughters, Kelly Loyd Pieczonka, who took time off from a career in retail merchandising to help reorganize and move the business. The move was planned before the recession, but the Loyds decided to move ahead anyway. Steve conceded he's had some sleepless nights, but things now appear to be paying off. 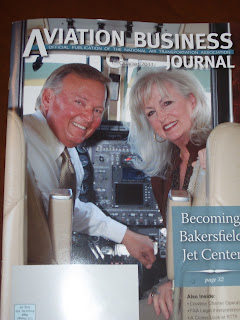 * ... P90X: One of the current exercise rages is a routine called P90X, and now it's made a mark in our nation's capital. Featuring trainer Tony Horton, P90X provides a difficult regimen but apparently does produce results by "confusing" the muscles with varying types and degrees of workouts. The Wall Street Journal reported that Rep. Kevin McCarthy, the House Majority Whip from Bakersfield, is among a group of influential House Republicans who are devoted to the workout. Apparently they gather in the old House gym, turn on a Tony Horton video and get to work. McCarthy told the Journal he had lost 28 pounds but had put seven back on. (photo courtesy of The Wall Street Journal) 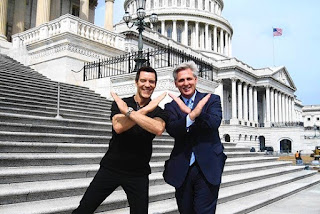 * ... DID YOU KNOW: Did you know that there was a street car barn on the northeast corner of 19th Street and Union Avenue? Reader Glen Worrell wrote that the corner also once hosted Aldo's Restaurant, Stan's and Stan's Drive-In. "Before World War II it was a streetcar barn. Before the war street cars ran from the Southern Pacific Depot (on Sumner Street) to the Santa Fe Depot on F Street and from about 18th Street to 24th Street. Actually there were several street car routes but the venture was never really successful."

* ... BOB WHITE: Do you remember the old Bob White drive in restaurants? Reader Ernie Lostaunau does. He gave me a call and said the restaurants, named after a type of quail, were operating in the early 1960s but disappeared sometime after that. "I don't think they made it to the 1970s," he said. One was located on Union Avenue around 17th Street, the second on California around O Street and the third out on Rosedale Highway.

* ... OAK BARBECUE: My tribute to the oak-fired grilled chicken at the Green Frog Market on Bernard Street brought this response from Mona Martin: "I would like to honor our friends on the Central Coast who have been instituting oak wood in their traditional 'Santa Maria BBQ,' a la Jocko's (Nipomo), Far Western (Guadalupe), Hitching Post (Casmalia) and the new kids, McClintock's (Shell Beach). This has long been a tradition on the Central Coast, carried on by generation after generation. I don't know of many who don't make it a point to partake of this wonderful culinary delight when visiting on the coast. Thank you for allowing my input, it is a bit close to my heart, as my two children are directly related to the Knotts family, proprietors of Jocko's."

* ... BAKERSFIELDISM: You know you're from Bakersfield if "you think using your turn signals is just an option."
Posted by Richard Beene at 11:22 AM