* ... COPPER THEFT: Valley farmers and many in the oil industry are being hit hard by copper thieves who are working under the cover of darkness in our vast rural areas. Attracted by the rising value of copper and other metals, thieves are hitting irrigation systems and oil facilities almost nightly, leaving farmers and oil producers facing high replacement costs. And, it's very difficult to provide security for large farms and oil production rigs in remote areas. The losses to the farmers and oil companies is said to run well into the hundreds of thousands of dollars. 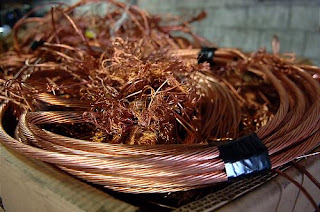 * ... MORE THEFT: The bad economy has also put homeowners across town on edge as burglaries continue to hit almost every neighborhood. Several homes in the La Cresta area up near Garces Memorial High School were burglarized this week of flat screen televisions, jewelry, computers and other items. And to make it worse, the criminals came back to the same houses later that night to steal the cars. Turns out they had stolen the spare cars keys and simply returned for the vehicles. But score this one for the good guys: Bakersfield police arrested an 18-year-old man and two juveniles in the La Cresta cases and recovered the cars.

* ... NO DISCOUNT: Cal State Bakersfield would love to have more fans out at Hardt Field to root for the Runners baseball team when Ohio State comes to town later this week, but they're not willing to budge on the ticket price to draw a bigger crowd. That's what university spokesman Rob Meszaros told me after I passed along a complaint from 77-year-old Jean Sherwood, who wondered why there wasn't a senior discount. "My husband and I are 77 and 80 years old and we would love to go to all the home Roadrunner baseball games and cheer them on," she said. "But we live on a fixed income and $7 a ticket is too much. I called Cal State and they do not have a senior rate for baseball games. We are missing out and so are they." I personally think a senior rate would be a nice gesture to get a few more fans in the seats (it's painful how few folks attend these games) but Meszaros said it was a non starter. But guess what? The university does have discounts for youths 17 and younger. So go figure. A quick Google search found that both Fresno State and Cal State Fullerton, two of the perennial Division 1 powerhouses in college baseball, offer both senior and youth discounts. And if a seat is empty, why not provide an incentive to fill it? The university needs to take a few lessons in Marketing 101 (or better yet, just call the Bakersfield Condors to learn how to draw a crowd) instead of turning a deaf ear to its potential audience. 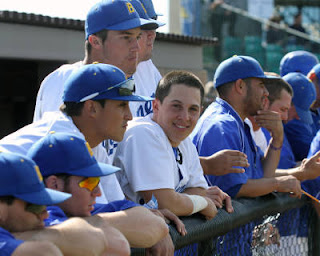 * ... MORE RUNNERS: Another Cal State baseball fan wrote to complain that the program gets little support from the administration. "The bleachers have limited capacity requiring spectators to stand or bring chairs, they are hard with no backs and are dangerous to walk up," he said. "The rest room facilities consist of outhouses (porta potties) that smell of you know what. They have had three years to put these things in place. The administration really does not care." Given the budget problems facing all public colleges, I'm not sure this criticism is entirely warranted but it certainly reflects a growing frustration among the school's potential customer base.

* ... WEST HIGH: The West High School class of 1976 is building a new legacy at the school with a $3,750 donation for a college scholarship. The 35th reunion of the class was held this past weekend, and it was attended by about 10 of the teachers who were so important to the students. "This is only a small token of their appreciation for the strong foundation going to West gave them," said alum Lamar Kerley.

* ... BAKERSFIELDISM: Reader Joe Foster Thomas says you might be a Bakersfield old timer if you remember "going to Booth's Music Store to purchase 45 and 78 RPM records." Located across from the Fox Theater in the 1940s and 1950s, the store had a glassed-in room to listen to the records before buying them.
Posted by Richard Beene at 12:58 PM

BRAVO re: the Cal State tickets! Terrible marketing and not a very hometown crowd conducive community spirit, either. Who do they think has the most free time to attend these games? Tickets should be less expensive all around for the first several years, anyway, to get people USED to having a NCAA Div. 1 baseball team in town. Many won't even try it because of the steep pricing. What a shame.

You may be a Bakersfield old timer if you can still sing the Booth's jingle.

You're the CEO of the only paper in town, so bury those Roadrunner games in the back of the paper until they decide to become part of the community. Bet that would get the point across.

Shame on you. They are a bunch of student athletes who have came to Bakersfield to help build this program with the already lack of support from the community and administration. People do not come. They have been nationally ranked so it is not their fault. They are showing Arizona, South Carolina, Kansa, Washington etc. where Bakersfield is on the map besides being the armpit of California.