* ... REMEMBERING CLAUDE: Claude Fiddler, the long-time Chevron geologist who died last year, left a lasting legacy in his generosity to the community in ways he never broadcast. And now his children have donated $100,000 to Cal State Bakersfield in the form of the Claude Fiddler Endowment to fund research in geology and other related fields. One can not help but be impressed by the commitment of this family to giving back, and certainly Claude and his late wife Shirley passed it on to their children, Linda and David. For those of us who knew Claude and Shirley, it is not surprising that their children have picked up where their parents left off in living a life that embraces community and the spirit of giving. What kind of legacy do you want to leave? 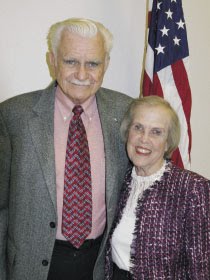 * ... SPOTTED: Kudos to the trim, bearded middle-aged man spotted on Alfred Harrell Highway across from the soccer park Saturday morning. His late model Camry was parked on the side of the road and he was alone, picking up trash in a public right of  way. Why? Because he cared enough to do so.

* ... OLD HAUNTS: Reader Jean Gillian submitted this nugget about old Bako eateries: "Wayne's Drive-in also had an inside cafe. Their chili size was the best high cholesterol meal one could eat. You could also pick up their donuts, milk and ice cream to go. Across 5th Street was Reed and Bell Root Beer stand with iced mugs for your drink and the best hamburgers you can imagine. The owners went on to open the Carriage House with wonderful food. Let us not forget Helen Lovegreen's Southern Kitchen at Chester and 6th Street.  Delicious chicken, home made biscuits and pies and you could also have your fortune told. Further down Chester was Mr. and Mrs of Radio Fame. Interesting place. So many places to eat and it was good!"

* ... MORE WAYNE'S: Another post on Wayne's came in from Dick Ferris: "I must correct the March 28th writer. Yes, Warren's was a favorite for burgers. In fact you could get five for $1 in the late 1940s. However Wayne's Drive-In was a few blocks north and was most certainly a drive-in. I will never forget Wayne's, because my grandparents bought me a chocolate shake that was so good I had them buy me another one. Bad decision, because I got sick and decorated the parking lot with both of them. While I am at it, has anyone remembered Reed and Bell Root Beer Drive In across the street from Wayne's on the northwest corner, and Budge-in on the other side of Chester? The Ferris family spent many happy times at the many Bakersfield drive-ins."
* ... MORE GOOD DEEDS: Happy to put the spotlight on a group of kids out at Seven Oaks who have made a habit of raising money for local worthy causes. Dave Morton, vice president of AC Electric, said it started last summer when his 12 year-old daughter Juliana announced that she wanted to have a bake sale to raise money for the St. Vincent de Paul Center. Julianna, her sisters, 14-year-old Katherine and 9-year-old Caroline Morton, and her best friend Annie Stone set up shop on Thornwood Drive between the 5th and 6th holes of the Islands Course at Seven Oaks.  They raised $357. That led to more bake sales for the Bakersfield Homeless Center, SPCA and most recently, Relay for Life. Over the month these young ladies have raised and donated more that $2,000 all on their own. They have since adopted the name "Sugar Coated Angels." And that's a feel good story.

*... WHO KNEW? Bob Weir, founding member of the Grateful Dead, sang about Bakersfield in a single on his first solo album in 1972. The song was called "Mexicali Blues"; the album was "Ace."