* ... RIP WARREN: Our community lost another popular businessman when Warren Carter lost his battle with cancer on Friday. Warren purchased Watson Realty in 1982 and grew it into one of the most powerful and influential realty companies in Kern County. Always deeply religious and with a booming voice and avuncular nature, Warren grew up in McFarland where he and his long-time wife Lenore raised their family. Lenore died of cancer on Thanksgiving Day 2009. Longtime Watson Realtor Mary Christenson called Warren a "gentle giant with a kind heart." Watson is now run by his son, Ken Carter. Keep this family in your thoughts.

* ... HISTORY QUIZ: Did you know that the first 55 U-2 spy planes ever built were manufactured right here in Bakersfield in a super-secret warehouse off Norris Road? That's right, the Lockheed-built plane that provided photographic evidence of Soviet missiles in Cuba, sparking the Cuban missile crisis, were built here and assembled elsewhere. And one of the pilots who flew  the U-2 over Cuba,  retired Air Force Gen. James Whitehead, also calls Bakersfield home. All this came to light during a Rotary presentation, during which Whitehead explained his experience in flying the aircraft. 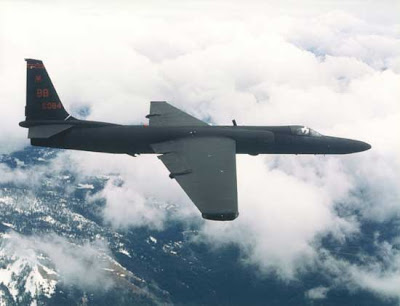 * ... BRAKE OR BREAK? Stephen A. Montgomery recalls working as a crew member on a locomotive when  he noticed "an emergency brake valve label was stamped to read 'EMERGENCY BREAK.' Actually we all need a break now and then and sometimes I guess it can be classed as an emergency."

* ... HOMETOWN: Marlene Morales, head of marketing at the law firm of Chain Cohn Stiles, submitted this as another reason to celebrate where we live. "Great golf courses with some of the least expensive green fees in California. Where else can you go tee-it-up at 3:30 p.m., round finished by 7:15 p.m., all for $32 including a cart at RiverLakes! Sycamore Canyon in Arvin offers two rounds of golf for only $30 (including a cart) Monday through Thursday after 1 p.m."

* ... BAKERSFIELDISM: Jack Kelley writes that you may be a Bakersfield old timer if "you remember when the Chamber of Commerce was located where the Kern County Museum is now."
Posted by Richard Beene at 10:33 AM