* ... MANGARIN TO MEMORIAL: Former KGET anchor Robin Mangarin Scott has joined Mercy and Memorial Hospitals to begin her new career in healthcare and community service. She has been named the Director of Strategic Marketing for the CHW Bakersfield Service Area. Robin has had a long relationship with Memorial through the Children’s Miracle Network. In addition, she has been a longtime supporter of Relay for Life and CBCC, which is now serving Mercy’s patients at the Florence Wheeler Cancer Center. This is a big coup for CHW Bakersfield, given Mangarin's long ties and deep equity in the community. 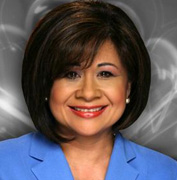 * ... RENTALS: One of the upsides of this long real estate slump is the fact that single family homes are cheaper than they have been in a long, long time. And that means investors are gobbling up homes and renting them out, and turning a nice profit doing so. In a recent survey by HomeVestors/Local Market Monitors, Bakersfield ranked No. 5 on a list of best cities to invest in rental homes. Ranked first on the list was Las Vegas, followed by Detroit, Warren, Michigan, Orlando, Bakersfield, Tampa-St. Petersburg, Phoenix, Fort Lauderdalae, Rochester, NY, and Stockton. 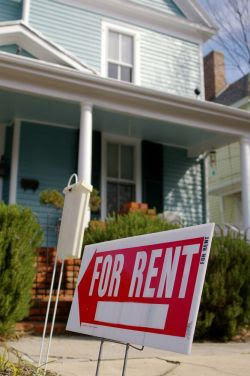 * ... INTERNMENT CAMP: Dick Porter is a local potato farmer whose family has owned property near Lamont for many years. It turns out part of the land his father purchased in 1949 was the former site of the Lamont Detention Center, an internment camp for German POWs during World War II. "The internees were pressed into helping grow a crop called Guayule which surrounded the camp," he told me. "Guayule was a source of latex. The sources for latex in Africa and South America had all but dried up and it was a most necessary commodity for the war effort." After the war, the internees were released and the detention center was torn down. "My father built a potato packing facility right on top of the old prison site," Porter said. "For many years our employees would find buried in the soil all kinds of small items left behind by the internees. That packing facility still stands today."  During the war, several hundred thousand Germans were held at camps across the United States, including Lamont and Delano.

* ... SPOTTED: Singer Sheryl Crow, in town for a concert at the Fox Theater Thursday night, was spotted in the Farmacy coffee bar at The Padre Hotel downtown. Her tour buses were parked outside the Padre. She is just the latest dignitary to stay at the Padre while doing business in Bakersfield. (photo of Crow's tour buses by Don Martin) 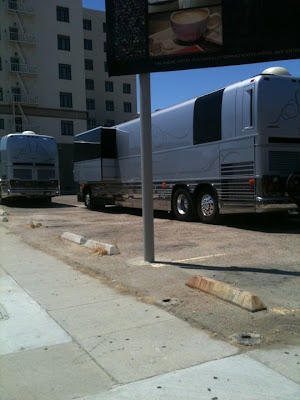 * ... DOWNTOWN GRANTS: Good news for folks interesting in helping revive downtown Bakersfield. The Bakersfield Californian Foundation has identified improving downtown as its focus for its next round of grants. The Foundation will be accepting applications on September 6 from non-profits focused on improving downtown. This would include groups devoted to beautification, theenvironment, historical preservation, public art and public safety. For more information or to contact us directly, please refer to our website: bakersfieldcalifornianfoundation.org

* ... SPORTING CLAYS: If you're looking for a fun way to support the Independence High School swim team you might want to calendar Saturday, August 27. The 2nd annual Sporting Clay fund raiser for the team will be held at the Kern County Gun Club, starting at 8 a.m. Entries before August 14th get a discount price of $75; after that it is $80 per person for a five-person team. Contact Amy Regan at areganranch@aol.com.


* ... WHO KNEW? The famous Bakersfield welcome signs that promoted "Sun Fun Stay Play" were located on Highway 99. The signs stood 49 feet tall and 60 feet wide and were intended to encourage travelers to stop in Bakersfield and patronize local business. They were torn down in 1983. 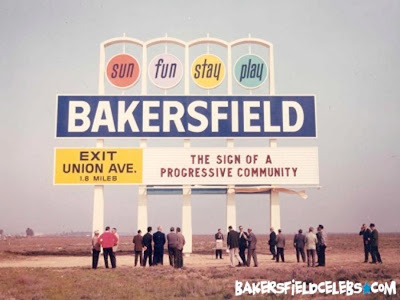