* ... TUITION HIKE: Not that it's a surprise, but it looks like we're in for yet another tuition hike for the budget challenged University of California system. The UC Regents say they will seek another 10 percent tuition hike, on top of an 8 percent increase already set for this fall. It's hard to keep up with the rising tuition costs but this will bring undergraduate tuition to $12,200, almost a $2,000 increase from where it is now. And remember, this is just tuition. Room and board can easily add another $10,000 a year and by the time you throw in books, food and incidentals, the average student is looking at $25,000 or more a year. Lastly, all this comes on top of news that the more selective campuses like Berkeley, UCLA and San Diego are admitting record numbers of nonresidents simply because they pay a much higher out of state tuition. 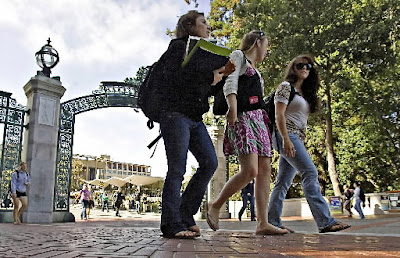 * ... YMCA: Steve Anderson and his wife, Kari Grimm Anderson, have stepped in to help the Kern County YMCA expand its programs to Delano and Arvin. Grimmway Farms is sponsoring programs in Arvin and S.C. Anderson is doing the same in Delano and possibly McFarland. Steve Anderson also dropped a personal $5,000 donation check to the Y, which is struggling to rebuild its program base.


* ... MORE YMCA: Janelle Webb is another longtime supporter of the "Y" and wrote to urge everyone to support our local Kern County chapter. She said her 6-year-old daughter Karalee attends the Y's summer day care and is participating in a drama program, a Disney Musical Revue. "The YMCA drama production is superb with the children receiving individual attention and nurturing for their skills with the finished performance something that could be recommended for any stage."

* ... SPOTTED: Nice to see so many folks swimming and kayaking the Kern River through town on a steamy holiday weekend. The area from Beach Park down to the Park at River Walk was busy and it's all relatively safe and shallow, at least compared to the raging Kern up the canyon. We will all miss these days when the river returns to a dusty shadow of its former self.

* ... NEWCOMERS: Ran into Neil Walker and his wife Pam the other day. Neil is with Kern Oil and Refining and a former president of Bakersfield Breakfast Rotary and they were escorting around town Pam's sister, Tish, and her husband Mike Burnett. The Burnetts live in La Canada Flintridge but are moving to Bakersfield to retire. They were touring town when the temperature was well north of 100 but in good spirits nonetheless. These are the kind of newcomers who will undoubtedly enrich our community.

* ... BAKERSFIELDISM:  Rosalee (Gelb) Pogue solved the mystery of the old downtown bowling alley which she identified as the Bakersfield Bowling Academy, located across from the Rice Bowl. "What a flash from the past it was to see the 'Bakersfieldism' in the paper this morning.  I use to go bowling with my father when I was young (in the mid 1950s). The bowling alley in question was The Bakersfield Bowling Academy across from the Rice Bowl. There was the other alley on East 19th (or 18th, I still get those confused) just east of Union called San Joaquin Bowling. Thanks also to readers Tony Bernal, Dave Wilkerson, Craig Holland, and Vicki Philips for also identifying these two old bowling centers.
Posted by Richard Beene at 2:03 PM