* ... SMALL WORLD: Local residents Sheryl and Lou Barbich just returned from Africa where they learned that, yes, it is indeed a small world. Said Sheryl: "We were in Zanzibar on the beach and ran into Aaron Rothkopf, who is a teacher at Miramonte High School here in Bakersfield. He was there as a prelude to climbing Mt. Kilimanjaro. He called today to say that he had made it to the top, but was totally exhausted when he finished the climb…13 hours, and at the top the temperature was minus 20 with a 40 mph wind! What a guy!" Then, to top that, Lou and Sheryl were visiting a small school in Tanzania when lightning struck again. "While the principal is talking about his school, we see a poster on his wall from the Cayucos Elementary School. It was to recognize the pen pal relationship they had. We showed the pictures to the principal in Cayucos, and they hope to restart the program. Great people."

* ... RIP MARINE: I want to note the passing of a young Marine who died recently in a car accident while heading back to base at Twenty-nine Palms. A.J. Hamilton was just 22 when he died, leaving behind a wife and 9-month-old daughter. He was a graduate of Highland High School.

* ... KUDOS: Reader Mindy White wrote to mention another Highland High graduate, Joseph Zasoski, who completed a semester abroad in Italy and will graduate from the University of Southern California next May. His brother Andrew graduated from Cal Poly San Luis Obispo and is now working in broadcast journalism. Mindy added: "You are almost an old timer if you can remember the old honky tonks - the Dungeon, the Blackboard. I was too young to get in legally but that didn't stop me from getting in an whooping it up to good old country music!" 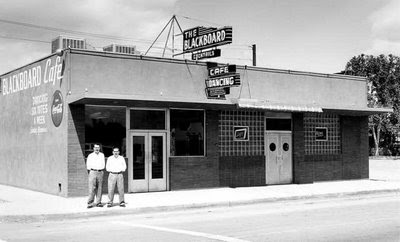 * ... THE BUZZ: The talk of the weekend was the incredible thunder and lightning that shook homes across Bakersfield Friday night and early Saturday morning. I thought the single-pane windows on my 102-year-old bungalow were going to explode, but it didn't seem to bother my 7-year-old gray tabby, who slept soundly through the entire light show.

* ... BAD FORM: Janet Torres wrote with this observation of behavior that is simply inexcusable. "This morning a man, possibly late 40s or 50s, in a small black truck was seen abandoning his Brittney Spaniel on Merle Haggard Drive across from the airport entrance. The dog was rescued by Sheriff's Deputies and the truck description and license plate number were turned in to the CHP; hopefully he doesn't get just a slap on the wrist."

* ... TOON'S: Marjori Payne wrote to say she vividly remembers the old Toon's piano store on Chester Avenue, where her sister took lessons. "We drove into the studio once a week from the Lamont area for her lessons. My parents had a dairy farm out in the area and my dad shipped his milk to the Carnation Company." She also remembers the famous Union Avenue Plunge, a huge swimming pool where "everyone went," as well as the popular Terrace Drive-In movie theater. "I also remember when Brocks had a store in Westchester and also the specialty store Harold Brown's. It's always fun to read about our history of what we lived and fondly remember."
Posted by Richard Beene at 11:22 AM