Remembering the events of September 11, getting to know the Pluot and worrying about the recession

* ... SEPTEMBER 11: This Sunday is the 10th anniversary of the terrorist attacks on the World Trade Center, and I hope each of you will find a special way to observe this day. At the very least we can all proudly display our American flags while remembering all the lives lost in the war on terrorism. Reader Tina Burke wrote to ask if The Californian was going to devote a page to Old Glory as we did last year. The answer is yes, we will, so look for it in your Sunday Californian. 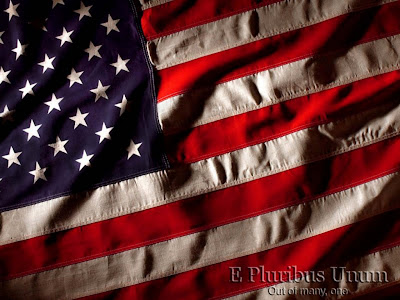 * ... RECESSION: Experts now say the odds of the nation falling into a second recession - California hasn't pulled out of the first one yet - are now 50-50. Many smaller local companies have made all the cuts they can, and owners are downsizing their homes and selling assets to make payroll. We may see a new wave of business failures if things don't turn around soon.

. * ... PLUOT: I was introduced to the "pluot" at the downtown Farmer's Market this past Saturday. If you haven't heard of it, the pluot is one of a number of new hybrid fruits that are hitting the market. The pluot his part plum and part apricot and is absolutely delicious. I was told these particular pluots were grown in Lamont. Other hybids include the pluerry (part plum and part cherry) and the peacharine (part peach and part nectarine. 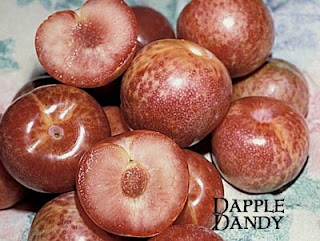 * ... THE BUZZ: There is a lot of talk among downtown property owners and business people about the proliferation of drug activity at the corner of 21st and Eye streets downtown, one of the popular corners for the homeless and groups of itinerant young people. One business owner told me he had gone to the Bakersfield police with his concerns, particularly after witnessing a drug transaction in broad daylight.

* ... OVERHEARD: At a dollar store on Olive Drive, a young woman asks the cashier to direct her toward "eyeliners." When told the store was out of eyeliners, the young woman responded: "Then tell me where the Sharpie markers are. I've used them before but you really have to be careful because what you see is what you get!"

* ... GOOD SERVICE: Add these businesses to the growing list of places where you can expect outstanding customer service: the downtown U.S. Post Office, where the familiar faces behind the counter are always smiling, and my service technician from Clark's Pest Control.

* ... COOKIE MAN: A reader passed along a wonderful story featuring former Bakersfield resident Don Wedel, who now spends his time baking cookies for needy children and their families in Midland, Texas. It's yet another example of how much good there is in a world that sometimes seems so crazy. Mary Lytell told me that Don, her cousin, has been helping the needy at the Midland "transitional house" for several years now. He is the son of the late Milt and Priscella Wedel and the younger brother of the late Jerry Wedel. (photo courtesy of the Reporter-Telegram) 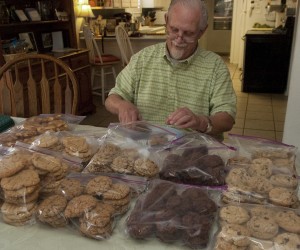 * ... BAKERSFIELDISM: Joyce Adams wrote to clarify and earlier post regarding the old Adams Shoes that once featured a size of extra long shoes. "Next to the five and dime (the name was Wagner's) was a shoe sotre, Adams Shoes. My husband, Al Adams, and I were the owners. The 'work boots' (actually shoes) were a size 35 and were made for Robert Wadlow. He had worn the shoes and outgrew them to a size 37 before his death at the age of 22. We still have the shoes that were on display at the shoe store. They are but 18 inches in length but look much longer!"
Posted by Richard Beene at 1:48 PM