* ... MAKE A WISH: I'm told there wasn't a dry eye in the house when Mike and Cathi Stier hosted an event last week for the Make a Wish Foundation. The guest speaker was John Crowley, who shared his family's journey to save his children from a devastating neuromuscular disorder called Pompe disease. Harrison Ford has done a movie based on their family's story called "Extraordinary Measures." Said one participant: "Mike and Cathi went to extraordinary measures to share the Make a Wish dream and the national director came to the event and pledged up to $25,000 in matching donations. The money will stay in Bakersfield since we have 38 children locally waiting for a wish."

* ... KERO: It looks like KERO TV 23 has decided to part ways with popular weather girl Melissa Dignan. The station's top brass told Melissa they would not renew her contract and she would be off the air by the end of this year. Melissa told me she was surprised and saddened by the news and that she has grown to love Kern County and wanted to stay. "This is my home, this is where I met my husband," she said referring to Brian Dignan, former assistant men's basketball coach out at CSUB. Melissa joined KERO in January of 2008 and is known for her perky, upbeat forecasts and for supporting the adoptions of homeless dogs and cats. Here's wishing her the best. 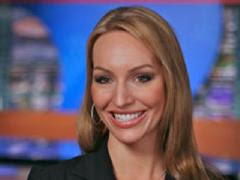 * ... UCLA: Another local kid is about to graduate from college, and this one is the son of Debbie Moreno, president of the Greater Bakersfield Chamber of Commerce. "My son Marcus, a former East High student who is set to graduate from UCLA in another month with a degree in Ecology and Evolutionary Biology, just had quite an experience to remember these college years by. While on a final quarter field and marine biology study on a tiny island off the coast of Belize, they had to cut the month long program short by a week and evacuate off the island in a hurry as Hurricane Rina approached. After almost a full day and night of travel I got a text in the middle of the night that they arrived safely back in Los Angeles."

* ... TOW SACK ANNIE: Yet another reader, Charly Price, wrote to recall Tow Sack Annie, a woman who walked up and down Edison Highway and Bear Mountain Road, hurling insults to those who dared yell her name. In the 1950s, Charly was just a teenager and on a whim he and some pals tracked Annie down to her trailer where they had planned to knock on her door. "But being brave macho boys we all chickened out and threw pine cones on her roof. Well, it wasn't long before she came out screaming and cussing. I will tell you that she scared the heck out of all of us and we never thought about bothering her again!"

* ... LA CRESTA MEMORY: Mike Huston was reared on La Cresta Drive and wrote to share a few memories of the old Alta Vista area. "Last week I drove down Alta Vista Drive between Columbus and Bernard. I was left with the memory of three food markets that were so close in proximity, yet separately thrived in the late 1960s. On the corner of Alta Vista and Columbus was a small convenience type store, named Sears Market. Traveling south on Alta Vista at Water Street you found a 'super' market named Spic ‘N Span. My grandmother lived across the street and frequented the store for all of her groceries. Spic ‘N Span had black and white checkerboard flooring, its own butcher shop along with an aging white haired butcher named Van. If I’m not mistaken, the Reimer family owned the store. Further south on Alta Vista at Bernard, you found Green Frog Market, where of course it still stands today. Other than the Spray Rite Car Wash and the Tam O’ Shanter, there were a host of other business in this stretch, which have faded from my recollection. Perhaps some readers will help."

* ... BAKERSFIELDISM: Terry Gaiser writes that you may be from Bakersfield "if you took your car to Three-Way Chevrolet on Chester Ave downtown for service and had lunch at Dave's Deli. You probably listened to the 'new' rock and roll music on KBIS, KAFY or KWAC!"
Posted by Richard Beene at 9:50 AM

P.S. It is La Cresta Drive, not Avenue.

Maybe KERO should consider bringing back Jack Church who should have never been fired in the first place! Who are these people that run that station?

Weather girl? Weather girl? I hope you'll be calling any persons of the male persuasion who tell us the temperatures "weather boy" from now on. Guess it's still 1970 in Bakersfield.

Alta Vista businesses at one time housed the Basque House of Beauty, Giordano's art studio, the Lemon Tree dress shop, a Standard staion, and a great mini golf course. Prior to being known as the Tam O'Shanter, the restaraunt was call the Shillelagh.

Spin 'N Span not only had Van (or Brig) around but George and Wes helped round out the staff.

Melissa was the best, guess I will be watching channel 17 NOW

Bring Melissa D. back she is our favorite weather girl. So fun to watch and very up beat.