* ... FIRE CHIEF: Kudos to my colleague Lois Henry for digging into the "retirement" of Kern County Fire Chief Nick Dunn, who is leaving under questionable circumstances. Dunn appeared at a press conference wearing Bermuda shorts and a knee brace and referred to his "battered body," but it's now clear there is much more to the story. (He was under scrutiny for allegedly using public property for personal gain) Either way, he walks away with a lifetime pension of around $175,000 a year, which we will all be paying for years to come. Legal, yes. But also distasteful. 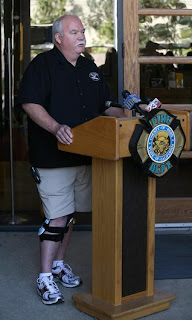 * ... GARCES TRIBUTE: Jim Doty read my earlier post about Garces Memorial High School and submitted this tribute to a Catholic school education. "We were living in England in the late 1960s (or early 1970s) and our son was the equivalent of a high-school sophomore. One day he told my wife and me that he would like to go back to the U.S. to go to school. My wife and I decided it was a reasonable request so we talked to a friend who had been in a similar situation when he was that age. He recommended his old school, a Jesuit boarding school, in southwest Arkansas. With his help, our son was accepted. We sent them a mighty fine boy; we got back an exceptional young man. He is now a senior executive for a major corporation, and has made us proud as punch, job-wise, but more important-son, man, person, everything-wise. That Garces turns out good students, and cares for them, does not surprise me. I am not Catholic, but I feel indebted to their educational system in every way. "

* ... BIKE RACE: Terrific news that the Amgen Tour of California bike race is coming back to Bakersfield in May. If you missed this race two years ago, make sure you catch it this time. This is spectacular show - it will be a time trial here - and you don't have to be a bike racing fanatic to enjoy the extravaganza. So mark May 17 on your calendars to see some of the world's best athletes in action. (photo courtesy of Velonews) 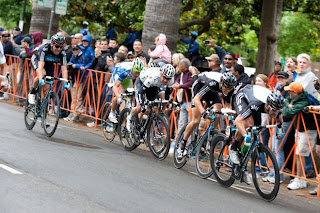 * ... SALLY THE SHOPPER: John Brock Jr., whose family ran the famous Brock's department store for years, weighed in with the final word on the store's Sally the Shopper program. "It actually originated at our store in the spring of 1952. The first person appointed to the position lasted about a month and then Pat Esposito (now Mrs. Lloyd Plank) took over and really became the first Sally. She had been in the position for about three months when the earthquakes of July and August hit Bakersfield, forcing Brock’s to move from its downtown location into a circus tent which was erected on a parking lot in the Westchester area, just south of today’s Westchester Bowl. The personal shopping service became quite popular during the circus tent period with Pat on the job. She continued to be Sally until about 1955, and the service continued under others until Brock’s was acquired by Gottschalk’s in 1987 (and possibly after that)."


* ... BROCK'S: And speaking of Brock's, reader Cheryl Bomar said her mother was a "Sally Shopper" and she worked in the gift wrapping department while in high school. "I made more in tips from the gentlemen shopping than I did in wages," she said. "It was during that time that I met Troy Donahue in the 'operator run' elevator. He said hello but I was too frozen to say anything."

* ... LA CRESTA: Janice Huston Montoya spotted her brother's comments about growing up in La Cresta and added this: "I can't believe my little brother, Mike Huston, didn't remember one of our favorite places on Alta Vista Drive, the La Cresta Sundry. They had the best hamburgers in town!"

* ... BAKERSFIELDISM: From Jerry Beckwith: "You might be a Bakersfield old timer if you remember going on a picnic with your grandmother Ethel and brother Mike, a bindle over your shoulder, to the Hillcrest sign north of Niles Street. There was nothing but foothills north of Niles and east of Horace Mann School.
Posted by Richard Beene at 1:58 PM

Email ThisBlogThis!Share to TwitterShare to FacebookShare to Pinterest
Labels: Brock's

Just to join in on the memories of the old Fedway store, my dad was the parking lot attendant there when i was about 7 or 8. He used to take me there with him when he was on his days off. I remember the escalator all too well, i remember going up ok, but when it came to coming back down, i was terrified. My dad had got on and thought i was right behind him, until he heard me shrieking, he had to come back up and carry me down. To this day i still dont like escalators. Dad is gone now, and i miss him alot, but the memory of this day still brings a smile. Thanks all, for the memories of Fedway and my DAD.