* ... HEALER: Have you ever entertained the idea of consulting a "spiritual healer?"  Before you dismiss it as a passing fad from the Bay Area or Santa Monica, you might want to hear from Debbie Charles, a local resident who works in spiritual counseling and dealing with energy sources. She has even - get this - performed house and office "clearings" to define negative energies. Intrigued? Debbie will be my guest on Monday's Californian Radio KERN 1180 at 9 a.m. Tune in and join a fascinating discussion.

* ... KAREN GOH: It's hard to imagine anyone working harder for reelection to public office than Fifth District county Supervisor Karen Goh. She seems to turn up about everywhere, knocking on doors to introduce herself, participating in Saturday's downtown cleanup day, and seemingly taking it all in stride. "I'm trying to meet as many people as I can," she told me when I ran into her at the Crabfest fund raiser recently. "I do it every day if I can." She was appointed to the position to replace former Supervisor Michael Rubio, who went on to the State Senate. 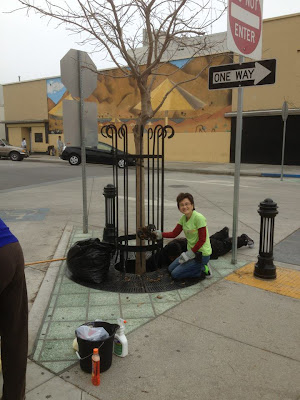 * ... OVERHEARD: A reader writes that she overheard a woman on her cell phone at Tony's Pizza "discussing her kindergartener Joelle's poopy panties. Apparently it has been going on for a few nights now. Wonderful thing to listen to when you are trying to eat."


* ... GOOD DEED: Tina Stout wrote to thank a couple of good Samaritans who helped push her stalled car out of traffic at the intersection of California Avenue and Stockdale Highway.  "I always wave at the gentleman who works at that corner who dances and holds a pizza sign.  I rolled down my window and said I needed help. He and three other young men pushed my vehicle through that intersection and into the Mexicali parking lot before the light turned red on us. They were truly my angels."

* ... BENHAM: Congratulations to Thomas Benham, son of Californian columnist Herb Benham and City Council member Sue Benham, who was recently promoted to prep cook at the famous organic restaurant Chez Panisse in Berkeley. Thomas graduated from Bakersfield High in 2008, attended UC Berkeley and is now following his passion in the culinary arts. I visited Thomas this past week, working as an unpaid "intern" at the legendary Berkeley restaurant founded by Alice Waters. It's nice to see young people find their passion and work so hard to fulfill their dreams. 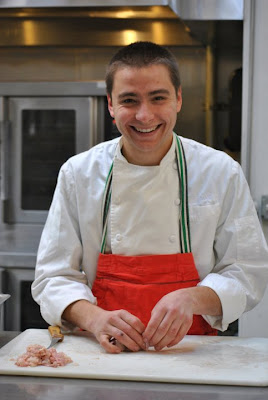 * ... VEGAS BABY: Ben Ansolabehere dropped me a note to weigh in on the Las Vegas sports writer who ripped Bakersfield after UNLV beat CSUB recently. "He should check out his historical facts about UNLV and its connection to Bakersfield. When UNLV put together its football program it thought that Bakersfield was a treasure trove of players. There were no less than 14 starters from Bakersfield on their first three teams ever. Many of these athletes helped UNLV to three winning seasons the first three years of that program, prompting the Californian to refer to the UNLV Rebels as the Rebelgades. This connection was established by three coaches coming from the same small mining town in Nevada, Elly. These coaches were Turk Eliades (North), Jerry Collis (BC), and Bill Ireland (UNLV). The next time that this young man talks about Bakersfield, he should at least know his history or he and Las Vegas 'may be destine to repeat it!'"
Posted by Richard Beene at 2:09 PM