A happy ending for Blackie, an American Staffordshire Terrier who was left in Bakersfield after his owner was injured in a truck crash. He is now back home in Texas

* ... BLACKIE: Patricia Boles is active in the local animal rescue community and shared with me the story of Blackie, a sweet American Staffordshire Terrier who was separated from his owner after a truck accident here. For three months Blackie was cared for by the folks at the Kern County Animal Shelter while his owner was convalescing in Texas. Boles meanwhile raised enough money to fly Blackie back to Texas in a private plane, but only after a commercial carrier at LAX refused because it thought Blackie was a dangerous pitbull. Said Boles: "Cherie Charlton spent hours on and off work exercising this dog... The dog was returned home by Bonny Schumaker (an amazing woman and president of a group called 'On Wings of Care') and of course all of this was overseen by the new (animal control) director Jan Woodward. Just think everyone should see that all the workers at KCAC have big hearts and though they have a distressing job to face daily they truly love animals." (photo of Bonny Schumaker and Blackie) 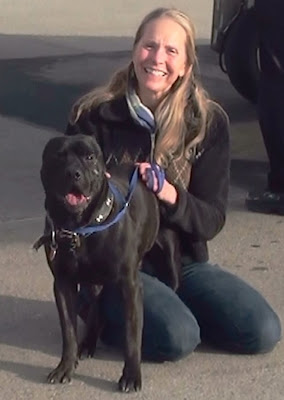 * ... WELCOME HOME: This is the time of year when the sons and daughters of Bakersfield who are living away or at college come home to rekindle friendships and enjoy a home cooked meal. One of those in town is Sarah Audelo, daughter of Joe and Mimi Audelo, who now holds a Master of Public Policy from The George Washington University in Washington D.C. Sarah graduated from Ridgeview High School and received her undergraduate degree from Georgetown University.

* ... MUSEUM: Bernie Herman, the retiring executive director of the Bakersfield Museum of Art, sent out a seasonal letter asking folks to donate to the museum. Herman will retire early next year (a search committee is interviewing finalists for his job now) and we should all take a moment to thank Bernie for guiding the museum these past eight years. When Herman became director, the museum had more than $1 million in debt. Today it is debt free and thriving, offering summer camps for children and sponsoring such popular events as Via Arte.

* ... HOLIDAY THEFT: Eileen Sanchez awoke the other day to find that thieves made off with her son's basketball hoop. "I know this might seem trivial considering what has been happening in the world these days, but I wanted to share my disappointment at a time of year that should be full of giving and good tidings. My son's basketball hoop was stolen by a thief in the night. Actually, more like probably four thieves as this basketball hoop had a 54 inch glass backboard, water in the base, and weighed at least 300 pounds, no easy task. We purchased the hoop for his birthday this past June and he has shot baskets almost everyday since. My son and his dad spent ten hours putting that thing together and rolling it outside making sure it was just the right height.  He taped off the free throw line and knew just where the three point shots were.  It's sad to discover how quickly someone can take the joy out of a young boy's heart. Again, I know having a basketball hoop stolen is nothing compared to many things that are happening, but it's just one more sad example of a culture where people are so willing to take from others without hesitation, and from a child no less."

* ... GOOD WORK: The folks over at West Rotary are up to more seasonal good needs.  The group volunteered to sponsor 30 needy children at the KCMH-Children's Services this Christmas. Said county worker Vija A. Turjanis: "Last week I needed a trailer to pick up all the gifts that Rotary West  donated in response to the letter our kids wrote.  The  generosity of this organization is truly amazing as they made the magic of the holiday season came alive. Our neediest kids are going to have the most awesome Christmas and they will believe that our community and Santa does care for them and most importantly they will know that they are not forgotten during the holidays."

I wish someone would steal my basketball hoop.