State Senate candidate Leticia Perez denies commenting on a video by the Kern Citizens for Sustainable Government, but a digital footprint indicates otherwise

* ... PEREZ: Leticia Perez, the county supervisor who is in a heated District 16 state Senate race, took me to task for saying she was"not amused"by a locally produced video promoting fiscally sound government. The video was produced by the Kern Citizens for Sustainable Government and is titled "If I Wanted Kern County to Fail." It talks about balanced budgets, pension and education reform,

personal responsibility and leadership. Perez sent me an email denying she had ever commented on the video and demanding that I "clarify" it in this blog. So here is the clarification: I have a copy of the email Perez sent to Jenifer Pitcher, the community liaison at KCRG, in which Perez says this about the video: "What a joke." That's not an official Perez statement, but I think it fairly captures how she feels about KCRG and its video. I asked Perez to respond, and if she believed her email had been hacked, and she responded that she would "look into it." So there you have it. Perez is among five candidates running in the May 21 election. She is generally expected to end up in a runoff with cherry farmer Andy Vidak, a Republican. 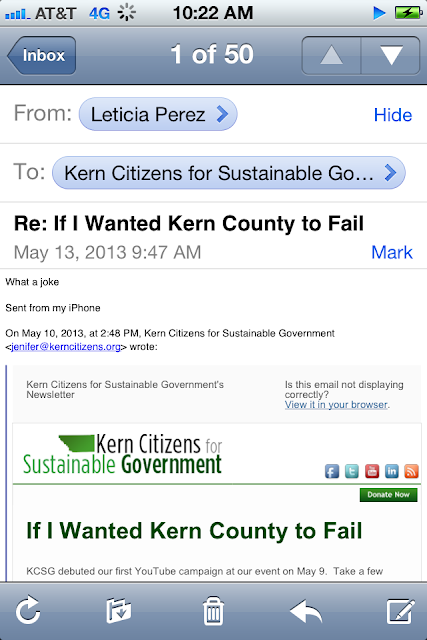 * ... SILVA: The confiscation of two cell phones from witnesses who said they videotaped the beating death of David Sal Silva at the hands of Kern County Sheriff's deputies may have a chilling effect on future witnesses. As one caller to The Ralph Bailey Show remarked: why would anyone tell the police they have video of a crime scene if they know a deputy will show up at their door and demand that the phone be surrendered? In the future, it's more likely folks will share the video with news organizations or friends before telling police they have evidence. Sheriff Donny Youngblood said his deputies were simply securing the crime scene and gathering evidence, but showing up at witness doors and demanding their mobile phones doesn't exactly engender trust. Meanwhile, this story has been covered by CNN, The New York Times, the Los Angeles Times and other national news outlets, not exactly the kind of image we would like to project. 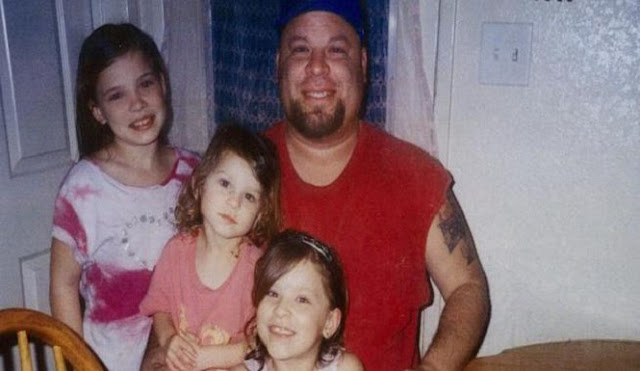 * ... BAD FORM: Mary Williams spotted this bit of really bad form in the parking lot of the Vons grocery store at the corner of Stockdale and California. "I was livid ... to find a small black and white dog inside of a White Toyota Camry. The temperature outside was 93. It must have been well over 100 inside of the car. No water for the dog, a crack of the window on each side, the dog obviously was suffering in the heat.  Fifteen minutes passed and still no owner of the car (I had to call animal control because I couldn’t leave with a clear conscience).   I wonder….  Could the owner have sat inside the car under the same circumstances and be comfortable? At least they would have the option to exit the pressure cooker." 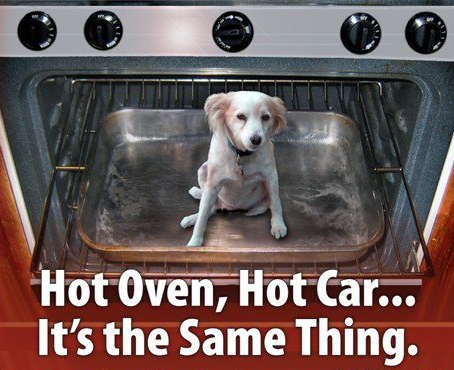 * ... PIT BULLS: And speaking of dogs, retired city clerk Pamela McCarthy had a nasty run-in with a stray pit bull while she was taking her Schnauzer Buddy for a walk in Westchester the other day. "A few blocks from home a stray pit bull came out of nowhere and attacked us," she said. "I have never been more afraid. Fortunately for me I was carrying pepper spray and some homeowners and a gentleman driving down Elm stopped and came to my assistance. I wound up with a few bites and Buddy was badly bruised and shaken and we made a quick trip to the doctor and vet. We were very lucky and I truly want to thank those who came to our aide. Animal control was able to locate the stray and will quarantine it for 10 days. This is the second time a loose dog as come after us. Please remind dog owners that dogs do not stay in their yards when they see another dog. So please, keep them fenced or on a leash."

* ... PARKING: Earlier this month reader Stephen A. Montgomery parked at City Hall to participate in Mayor Harvel Hall's annual litter survey. His reward? A parking ticket for $25. "It never occurred to me permits would be needed for that parking lot considering the lack of any other interests anywhere nearby that might want parking but now I know better," he said. No good deed goes unpunished.

Posted by Richard Beene at 4:16 AM