More Americans than ever now have college degrees and retired Lt. Col. Joe Drew is inducted in the ARMY OCS Hall of Fame, along with his son

* ... COLLEGE: There has been a surge in the percentage of Americans who how hold a college degree. That's the word from the National Center for Education Statistics, which reported that 33.5 percent of Americans aged 25-29 how hold at least a bachelor's degree. That compared with 24.7 percent in 1995. Locally, according to Scarborough Research, just 14.8 percent of Kern County adults hold a college degree.

* ... DREW: Hats off to Joe Drew, a Tejon Ranch executive who recently was inducted into the Army's Officer Candidate School Hall of Fame at Fort Benning, Ga. Drew served in Vietnam and retired as a lieutenant colonel. And to keep it all in the family, his son Col. Thomas R. Drew also was inducted into the OCS Hall of Fame at the same time. The Army OCS Hall of Fame honors infantry officer graduates who have distinguished themselves in military and civilian pursuits. This is believed to be the first time a father and son have been inducted together. And to make it truly a family affair, Fred Drew (Joe's brother and himself also a Vietnam veteran) was inducted in the Army OCS Hall of Fame in 2007. As for Joe:  his military awards include the Legion of Merit, two distinguished Flying Crosses (V Device), Three Bronze stars (V Device), Twenty Two Air medals (V Device) two Purple Hearts, and the Vietnamese Cross of Gallantry. 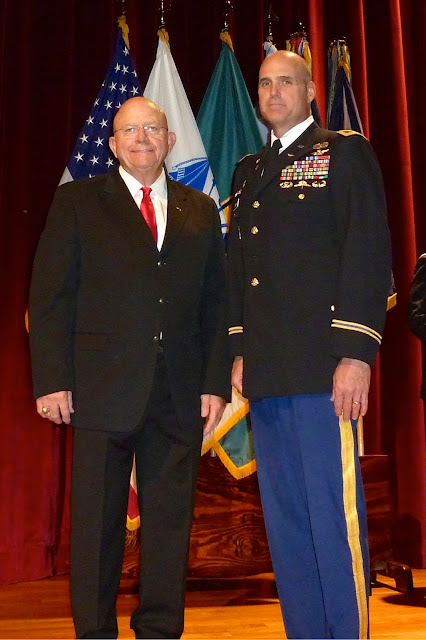 * ... BAD FORM: A driver spotted two bicyclists (one on Brimhall and the other on Old River) riding against the traffic in clear violation of traffic laws. Both were almost hit by cars taking right hand turns. Remember: if you are on the bike, ride with the flow of traffic.

* ... FESTIVAL: The first Kern County Nut Festival is in the books, and organizers should be happy about how it all went. Some 9,000 people showed up at the Kern County Museum to celebrate the almonds, pistachios and other nuts that are so important to our local economy. These events are always good venues to meet and greet, and the Nut Festival did not disappoint. Hats off to some of the organizers and volunteers I spotted there, including Sheryl Barbich, Beth Pandol, Tracy and Brian Kiser, Nancy Chaffin, Coleen McGauley, Brian Burrow, Cynthia and Gary Icardo, Jim and Patrice Black, Pat Collins, Linda Hartman, Kimberly Ward Graham, Mimi Audelo, Chris Frank and so many more.

* ... GRANT: Hats off to the employees of the Von's on Coffee Road, who awarded a grant of $2,500 to the Assistance League of Bakersfield. The money will go to help fund Operation School Bell, which provides new school clothing to elementary age children locally.

* ... NON PROFIT: The Society for Disabled Children is preparing for its annual camp in which 42 kids will spend 10 days fishing, swimming, riding horses and staying in cabins. Patricia Henson, the group's executive director, is looking for sponsors to help offset the costs. If you are interesting in helping, contact the society at (661) 322-5595.

Posted by Richard Beene at 9:50 AM