* ... OIL SUMMIT: The Taft College Foundation will be holding a one-day energy conference featuring policy makers, regional leaders and experts in petroleum production. The "West Kern Petroleum Summit" is planned for Friday, October 18,  and will focus on the energy section that is so important to Kern County. One

of the speakers will be John Hofmeister, a former CEO of Shell Oil and the author of "Why We Hate the Oil Companies: Straight Talk from an Energy Insider." For more information call Sheri Horn-Bunk, executive director of the Taft College Foundation at (661) 763-7936.

* ... MAZE CUP: It is not often you get to see some of the most talented junior tennis players in the West up close, but that is what the Maze Cup is offering this year at Stockdale Country Club. It is all set for June 28-29 when the best junior boys and girls from Northern and Southern California square off in a Davis Cup format. Past competitors in this event include Pete Sampras, Bob Bryan, Michael Change, Andre Agassi and Lindsay Davenport. And, it is all free.

* ... COLLEGE TOWNS: The website Bleacherreport.com recently released its list of the 33 most "coolest college towns," based on the popularity of the campus and charm of the downtown. The top on the list: Athens, Ga., home to the University of Georgia. Rounding out the top ten were Amherst, Mass., Chapel Hill, N.C., Charlottesville, Va., Ann Arbor, MI, Princeton, NJ, Ithaca, NY, Athens, Ohio, Berkeley and Austin, Texas. (photo of downtown Athens, Ga.) 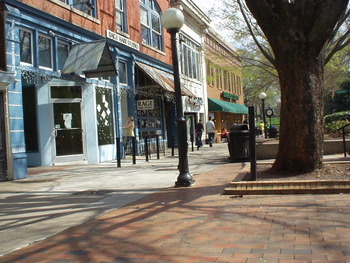 * ... BAD FORM: More feedback on tensions between motorists and bicyclists, this one compliments of Karen King. "Years ago my adult son was riding his bicycle on New Stine Road in the proper lane and direction. A truck pulled up close to him and the passenger threw water at his face, almost causing him to fall over.  The passenger laughed and they drove on.  When the truck stopped at a light, my son rode up close to the truck and yelled loudly into the open window.  It about scared the guy to death. Although I told my son that is a risky thing to do in this day and age, I did understand his sense of satisfaction."

* ... TRUMPET: Local CSUB trumpet player Brent Williams has been selected to participate in a prestigious seminar near Boston called the Chosen Vale Center for Advanced Musical Studies. He will have opportunity to study with trumpet greats such as Thomas Stevens, John Wallace, Mark Gould and also work with Yamaha Corporation's head trumpet designer Bob Malone. Brent currently studies with Edward Carroll at California Institute of the Arts and is entering his senior year at CSUB where he studies trumpet with Sal Panelli.

* ... MEMORY: A reader asked that I post this question: Does anyone remember a bowling alley that was on Golden State between V and 24th Street that had a trophy shop in it?
Posted by Richard Beene at 8:24 AM

Richard, it was the Bakersfield Bowling Academy. When I was in high school at BHS in the 70's, we went there for P.E. class.