Andy Vidak to appear at Bear Mountain Sports this Saturday, and introducing the new Witch Fingers grapes from the Pandol family in Bakersfield

* ... PANDOL GRAPES: How many of you have seen the new Witch Fingers grapes developed in Bakersfield by the Pandol family? They do look amazingly like pointed fingers, and they were recently featured in the New York Times. Said the Times: "Here’s a showstopper on the table: elongated, seedless, maroon grapes, called Witch Fingers, that were developed by crossbreeding native American grapes from the East with Mediterranean varieties. They are grown by the Grapery, a specialist in Bakersfield, Calif., and are available until the end of August. Only about an inch long, the grapes have a flavor that almost suggests plums. Serve them with cheese, in a salad with ricotta salata and rosemary, or arrange them on custard tartlets."  (photo courtesy of The New York Times) 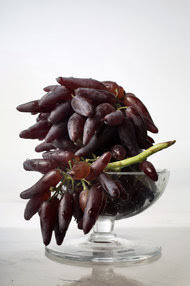 * ... VIDAK: Andy Vidak will be making an appearance this Saturday at Bear Mountain Sports to thank Kern County voters for helping him defeat Leticia Perez in the recent state Senate runoff. Gene Thome, the owner of the gun shop, told me the Hanford cherry farmer be at the Weedpatch Highway showroom at 10:30 p.m. Vidak's appearance comes while The Bear is holding its annual deer and dove sale, an annual event that includes music and a raffle for an AR-15 rifle. 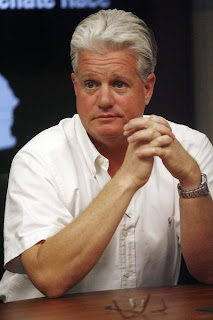 * ... MARK'S STORY: The latest installment from my friend Mark James, who I reconnected with after a 35 year absence. I share it only because I find it so compelling and relevant in how we all approach our lives and the regrets that live within all of us. Mark was extremely successful in financial terms, but privately lived in hell. He was gay and never came out. Said Mark: "I was a university student, president of my class, and worked for the Georgia Senate Majority Leader in 1975 and 1976 during the legislative sessions. Again, even deeper into the closet. I kept myself working so hard I left no time for a social life. The loneliness was palpable but I believed I had no choice so I persevered. After getting my degree I served in the US Navy, stationed at the Pentagon as an editor in the Office of Special Correspondence, Congressional Liaison and Naval Ombudsman, reporting to two admirals and the Secretary of the Navy. This was great work and that is where I came to fully appreciate the power of helping others in meaningful, life-changing ways. I had never met as many gay men as I met at the Pentagon in the Naval Service. Many more Marines than Sailors. All living closeted, paranoid lives. We all compensated by being regarded as the highest performing, most dedicated, most trusted, most educated. Still, we were, effectively, strait-jacketed; always aware that our high security clearances made us susceptible to frequent background checks. I lived in the barracks with a man m  age, in the same room, for two years. Only years later did we learn each of us was gay.  As I look back I wonder why I lacked the courage to come out. In fact, this recent correspondence with you is the most I have outed myself in my life. I guess because I have nothing to lose now, and am finding writing about it to be healing."

* ... PARKWAY: With the opening of the Westside Parkway, Cathleenn Colbert submits this thought on its design. "Let's save some resources and hardscape the Westside Highway. Cover the slopes with concrete and then take advantage of our local artists to create murals and sculptures. Let's create a drive-thru art museum!"

* ... MORE PARKWAY: And then there was this from Brad Rios. "My wife Katy and I live near the new Westside Parkway. When you look at the new parkway it's a far cry from the proposed lush one shown to the community three years ago. It takes the term 'hard scape' to a whole new level. As we were driving by the parkway the other day my wife said, 'Westside Parkway? More like Westside Barkway!' So, until it looks closer to the proposed development we believe the Westside Barkway is a more fitting title."