Ryan Beckwith, sacrificed at Bakersfield College, heads to Cal State Bakersfield to work in the athletic department, and more readers lament the trash on our streets


* ... BECKWITH: It looks like former Bakersfield College Athletic Director Ryan Beckwith has landed on his feet. Beckwith, who was forced out at BC after the football team was stripped of its championship because of program violations, is joining Cal State Bakersfield as a strength and

conditioning trainer in the athletic department. CSUB Athletic Director Jeff Konya said Beckwith will likely start as a part-time employee. Beckwith was only at Bakersfield College for two years, and many thought he was unfairly painted as the fall guy for program violations that had been going on for many years. 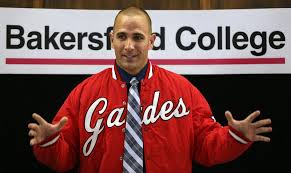 * ... TRASH: Some things are just too hard to believe. Consider this note from Patricia Seymour: she was taking a walk down Panorama Drive near Thorner School when she spotted a white pickup with a black trailer pull into an open field. And sure enough, the occupants dumped a full load of trash right in the open field. She called Bakersfield police and the dispatcher insisted she had to witness the incident, which she had. "I realize there are other emergency calls... so we started walking home and at Fairfax we saw three detective cars driving from the north. We figured they had been out practice shooting at Hart Park or to a meeting.  I don't know if detectives go out on calls but as I am a multi-tasker and I figured they could have dropped by to at least give warning to these dumpers. The area at the end of Panorama Drive is constantly being dumped on. It's a sad sight when one is trying to exercise and enjoy the great outdoors."

* ... MORE TRASH: And speaking of trash, Ken Barnes has been going to Canada to hunt for more than 25 years. "On our 40-mile drive from the airport in Edmonton to the town of Tofield, it would be unusual to see more than three or four pieces of litter along the highway for the entire trip. And they do not use clean-up crews....the people just do not litter!"

*... OVERHEARD: On the first day of school, a mother tells her teary-eyed kindergarten daughter that she must go to her class or the school will call the police and her parents will go to prison.

* ... SPOTTED: Having a bite to eat at The Padre Hotel bar the other day were Supervisor Leticia Perez, fresh off her loss in the 16th state Senate district runoff, and Roy Ashburn, who also is recovering from his loss in a supervisor's race.

* ... CALAHAN: Former KGET reporter Tim Calahan is back in the business, joining KERO TV as a breaking news reporter in the afternoon and the 11 p.m. co-anchor along with Jackie Parks. Calahan had most recently been with the Kern County Mission.

* ... MEMORIES: A walk down memory lane with Gene Bonas on the old Andre's Drive-in. "The Andre family ran both Andre's Drive-Ins and the Garces High School cafeteria.  Mary Andre managed the Niles Street Andre's, Joe managed the Brundage Lane Andre's, and John managed the Garces cafeteria and filled in when Mary or Joe needed time off... My memory of Andre's on Brundage had to do with two Garces students who worked at the restaurant.  A close friend of mine ran the grill ensuring all the food was cooked to perfection.  I can still taste the hamburgers and fries that (my friend) made and snuck to me out the back door without anyone's knowledge."

Instead of complaining why doesn't Patricia Seymour go pick up the trash and put it where belongs. If you witness such an act and then leave it there, you're part of the problem as well.