Bako Bits: Thanksgiving in Bakersfield, some really good form out at CSUB and a shout out to the Bakersfield Museum of Art


* … GOOD FORM: Here's a feel-good story about how one person can make a difference. It comes from an anonymous CSUB professor. Enjoy. "I am writing to you today as an anonymous professor here at CSUB to tell you about an amazing CSUB student. His name is Nima Mashoon. I have never done this before but I could not resist. He is currently a masters biology student and I do have to say a great one indeed. He is always offering to help people in need and this quarter he’s gone far and beyond. He started talking about a canned food drive to help the homeless and less fortunate this

holiday season, as 'every person deserves a warm meal.' Well with his diligence and hard work his small canned food drive has been spreading like wildfire. He has reached across campus and what was supposed to be a small drive has turned out to be over 1,200 items with more to come. Even with this he still seeks for more items so he can help as many people as he can. I can truly say that I have never seen a student that has been so great in all my years of teaching here. He is a great person and I would want nothing more than for everyone to recognize him and what he is doing. He has been an inspiration for not only faculty but also other students and me alike and maybe he can reach even more people."

* … GOOD FORM: Deanna Haulman gave a big shout out to the "delightful young man that is often found working the drive up window at Taco Bell on F Street.  He greets the drive up cars with 'good morning sunshine.' We found out the other day he also works across the street at the Chevron station and is going to school majoring in accounting.  He is not only a great asset to his current employers but any company that hires him in the future. Heads up human resource directors watch out for this guy and snap him up quickly before another company does."

* … PIE RUN: It was a record turnout for the Thanksgiving morning Pie Run out at Hart Park. More than 400 walkers and runners showed up this year, bringing with them piles of cupcakes, scones, cakes, breakfast muffins and breads. Pie Run founder John Rous told me the crowd gets larger every year, and this year they were treated to a spectacular sunrise. All the left over food was donated to local homeless shelters. (sunrise photo by Don Martin) 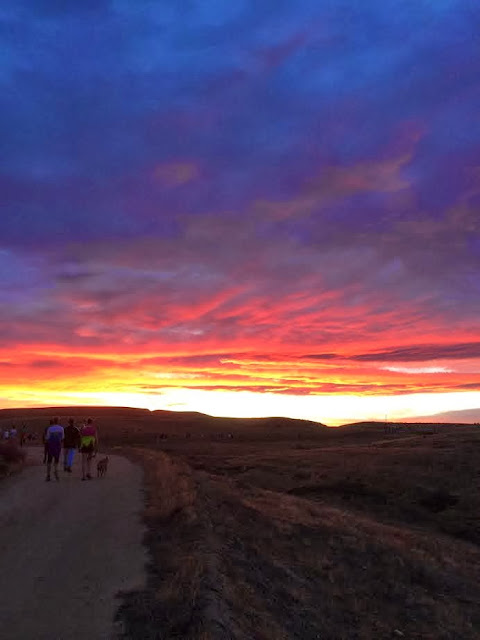 * … MUSEUM: Sometimes it takes a newcomer to the area to truly appreciate everything that Bakersfield offers. Kathy Harlan and her husband moved to Bakersfield in March, and are now enthusiastic supporters of the Bakersfield Museum of Art. "Every time we have visitors, I show them around and they are always impressed, too. Currently there are three great exhibits, one is a California modern landscape painter, another is pop art ceramics and paintings, and Alfredo Arreguin’s tile-like paintings. Each is very different but equally enjoyable. The price is great, too, for less than a movie ticket. I mentioned to an acquaintance that I was a docent at the BMoA and she asked, 'The Kern County Museum?'  No, the museum of art downtown. She looked at me like I had two heads!"

* … TRASH: Reader Gerhard H. Schmidt wrote to suggest I stop writing about trash around our  community. "The people that are the culprits obviously don’t read the paper. The suggestion of photographs documenting offenders sounds good. However, in the past, when this came up, I believe there was some response from the police department, that only if an officer saw it, could there be any action taken. But many offenders might well use the internet. Is there some web site where pictures could be posted, showing the actions of these people?  Only some way that shows this behavior as shameful could work for change."

* … MORE TRASH: Yet other readers, like Walter E. Stewart, thinks shedding more light on the issue is a good thing. And he added: "The south end of the alley between California Avenue and 14th Street… K Street and L Street … is a habitual pigsty. This is not way out in the boondocks… this is central Bakersfield. Why don't we rename it Bakersfield Trashfield?"