* … PANHANDLERS: Remember the woman who noted that vans pull up each morning at the shopping center at California Avenue and Stockdale Highway and drop off panhandlers? Well here is an update. Said Kathy Scott:  "When I went to my weekly meeting, a few days after you published my letter, I was told that the whole shopping center was talking about my letter and

appreciative of letting others know about the big van that drops the panhandlers off in the mornings and picks them up late that day. But they said it seems that they must not read the paper since the day after it printed they dropped them off in a big brand new Lexus or BMW! Shameful that when we as a nation of giving to those in need, those that obviously are NOT in need, found a way to deceive and take advantage of us. I believe if we truly want to help those in need we need to stop giving money to anyone panhandling and instead give money to charities or a food bank or a homeless shelter ... Just my opinion."

* … MEMORIAL DAY: Did you catch the planting of 1,000 flags at The Park at River Walk this weekend? It was a beautiful scene, but some folks questioned the timing of it. Said Mary Webb: "With all due respect to military servicemen and women's organizations, it was a well-intentioned, but ill-conceived idea. On a popular three-day holiday weekend, when parks see maximum usage, the flags disallowed usage of much of this park to families. The flags were erected in an area where permanent grills are installed for picnicking, and where children are usually running about playing tag and other games, and families have blankets spread out for relaxing. Next year, why not use the very large lot across from the park that has been vacant for at least 20 years? Bring in a watering truck two days beforehand, and have volunteers erect the flags. There's ample space available for concessionaires, canopies for promotional activities, etc. The patriotic display would be just as showy, and ....it would leave our parks for their original intention: family recreation." (Photo by Karen Goh) 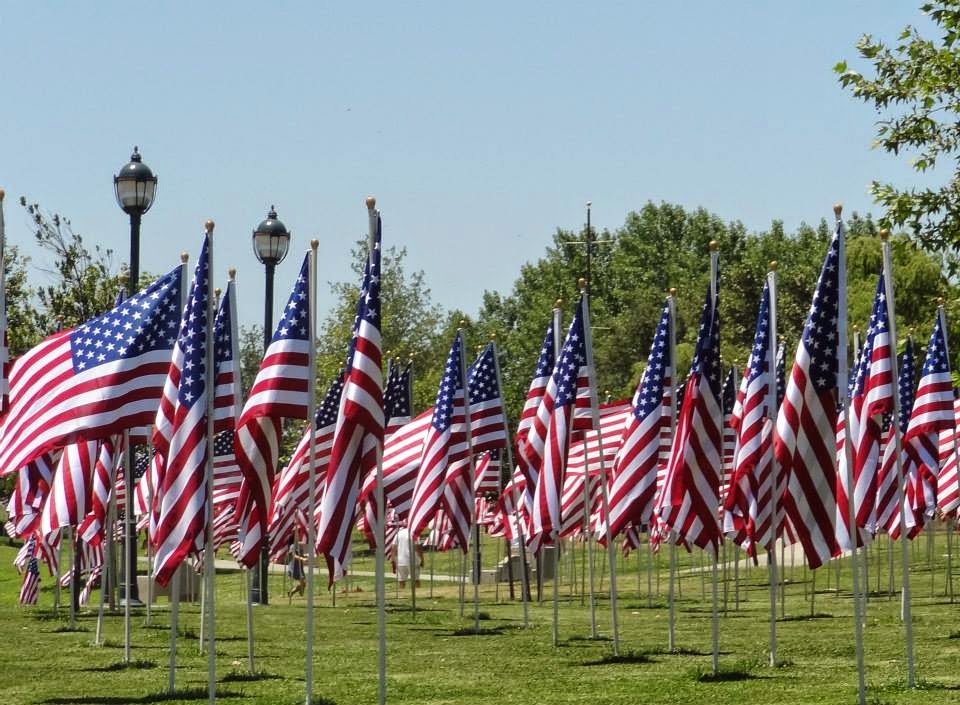 * …. MAD AS HELL: Doug Winston says perhaps he was inspired by Tara the super cat, but over Memorial Day he took matters into his own hands. It began on Friday at the Ride Aid at Brimhall and Calloway when he spotted a couple tossing candy wrappers out of their car window. "I'm not sure if I should be proud of what happened next," he told me. "I picked up all of the wrappers and threw them back in their car right in front of my wife and told them not to litter and don't be a**holes. This is when I noticed that they were stoned out of their minds. Staring back at me were watery, red eyes in disbelief. This only made me more angry so I left. Maybe I should've called the police or something. I figured I'd done enough for one day. But wait there's more. This Memorial day morning two German shepherd mix dogs were roaming around our front yard. No collar, no tags and no microchip for identification. We found out there was no microchip from the Easton Drive emergency veterinarian hospital. We also found out that these were the sweetest dogs we ever met riding in the car to the hospital and back. Of course everybody is closed on Memorial Day so we had to call the non-emergency Bakersfield police dispatch to get the animal control vehicle to come pick up the dogs and take them to the city shelter.  The driver was a bright spot in the day, an awesome guy and clearly asset to the BPD. Somebody who really seemed to care for these dogs." To end the day, Doug spotted a couple walking their Husky on the hot bike path while it was 95 degrees. He let them know this was not wise. He continued: "Apparently I need anger management but I feel much better now that I've written this, thanks for being my outlet." You are welcome Doug!

* … HONOR: Hats off to Ogden Kiesel, a dedicated teacher for the Kern Superintendent of Schools – he is a science teacher at CLC Tech Community School --who has named 2014 Teacher of the Year by the Juvenile Court, Community, and Alternative School Administrators of California.

* … MEMORIES: Joe Scott was born in Bakersfield in 1945 and has a fond memory of a man standing on the corner of 19th and Chester selling newspapers. "He wasn't operating a newspaper stand. He just stood there with a canvas bag filled with folded newspapers over his shoulder. And he would sing out in a rather beseeching manner, 'Get your Bakersfeeel Califorrrnyun.'  I remember the paper being sold in downtown Bakersfield in that fashion into the 1950s.  Even though the man is gone, it's comforting to know the 'Bakersfeeel Califorrrnyun' is still here." Thanks Joe, I second that notion!

Posted by Richard Beene at 1:27 PM