Residents on Bakersfield's east side lament the lack of services, squatters take over houses on 24th Street and remembering those local car dealers from long ago

* … EAST SIDE: Marilyn Sullivan is a proud resident of the east side, but she is frustrated by the lack of services in the area. "Take a drive out 178 on our in- progress freewa.  You can't help but notice the complete lack of commercial development east of Morning Drive. Our councilman has said it's

because of the recession, lack of rooftops, Caltrans, etc. There are many housing developments but no grocery stores. However, the new freeway will make it more pleasant  and easy to drive out to the west to shop and buy groceries. Just one Sully's corner (Ming and Buena Vista), or a Brookside deli and gas, a Trader Joe's (Greenfrog left a good location), a clean, modern sports bar, would be wonderful. Why isn't somebody (city of Bakersfield) doing something (incentives) to bring commercial development to the northeast? … I've lived in the northeast for eight years. In that time, very little has changed, except for government projects." (photo by Fred Castillo)

* … SQUATTERS: It looks like squatters are taking over some of the homes on the north side of 24th Street that have been purchased by the city for the eventual widening process. Neighbors said that one house that was recently vacated had been taken over by a homeless couple and their dog but were chased away. As the project drags on, we can likely expect more of this.

* … LIBRARY: For all you old timers out there, the Baker Street branch library will celebrate its 100th birthday this May, and the Friends of the Baker Library will be holding an open house. Susan Bennett told me the group is putting together a scrapbook of memories and family pictures of the library. If you want to share, bring your pictures to the library where they will be copied and returned to you. The celebration is set for Saturday, May 9, from noon to 3 p.m. The email for the group is Bakercelebration@gmail.com.

* … EAST HIGH: There is an impressive group of high achievers who will be inducted into the East Bakersfield High School hall of fame next month. Among those to be honored are Superior Court Judge David Lampe, oilman Chad Hathaway, Jack Randolph, Michael Dellostritto, Dr. David Smith, Terry Maddux, Carl Bryan and Steve Gradowitz. The event will be held at the Marriott Hotel on Saturday, Feb. 28. Tickets are available at the EBHS finance office. 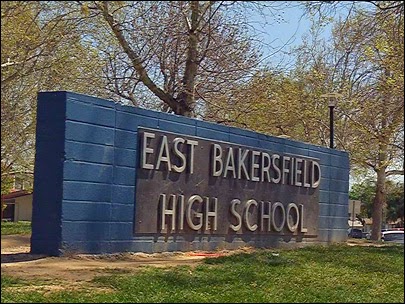 * … CAR DEALERS: A few readers added to the conversation about old auto dealers. Said Marilyn Kendig: "What about Leo Meek Automobiles? I hear that little ditty over and over in my head and can still sing it ---- '2 - 7 - 1 -1 Chester Avenue, Leo Meek Automobiles.' I miss that." And Bobbi Womack added: "Don't forget the Packard and foreign car dealership at 23rd and H street (northeast corner) and
Haberfelde Ford on Eye Street."

* … MEMORIES: This memory from a reader reacting to a recent post on the old Vincent's bicycle shop. "Well my first Schwinn came from Snider's. Wheeling in the backdoor in the alley off Baker for service (early 1960s). Still there, on Union Avenue now, selling bikes and best locksmiths in town."