Bobcats are spotted on the bike trail in southwest Bakersfield, outdoors columnist Steve Merlo dies and sharing some memories of old Bakersfield

* ... BOBCATS: There have been more bobcat sightings out on the bike trail to the west of town, the latest coming earlier this week when my friend Jason Barnes was cycling out toward Enos Lane.

Barnes managed to snap a handful of pictures of the young cat as he rode past. The bobcat seems undisturbed by Barnes on his bike and simply sauntered alongside the path as Barnes rode past, cell phone camera in hand. The drought has pushed bobcats and other wildlife closer to the neighborhoods in the southwest, but there have been no indications that they pose a threat to anyone. 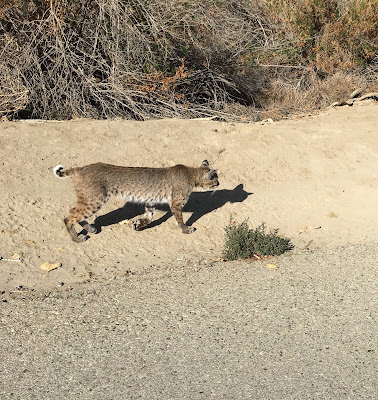 * ... CYCLISTS: And speaking of cyclists, Bakersfield has always had a robust cycling community but there has been a noticeable spike in the number of cycling "commuters" on our streets, particularly in the downtown area where millennials on fixed gear bikes share the road with the more serious recreational cyclists. If you are driving, make sure you are alert and "share the road" with these folks.

* ... STEVE MERLO: I was saddened to learn that outdoors columnist Steve Merlo died of an apparent heart attack. Merlo was an avid outdoorsman, and I appreciated how he wrote about the hunting and shooting sports in ways that made them accessible to folks who never owned a weapon. He was a strong advocate of the 2nd Amendment, a proponent of the environment and a level head when it came to how the shooting sports can play a healthy role in our society.

* ... OVERHEARD: A commuter who lives on the east side of town but works off Truxtun is telling a colleague: "I just won't go through California and Oak at rush hour anymore. I am thinking of taking Rosedale to Mohawk ... that is how bad it has gotten."

* ... SPOTTED ON FACEBOOK:" I’ll call it a smartphone the day I yell 'Where’s my phone' and it yells 'Down here! In the couch cushions!'

* ...MEMORIES: Here’s a follow-up on Loren Stroppe’s memories of Ewing’s Stockdale Inn, compliments of Cheryl Saki: "After the Ewings failed to renew the lease on the site with the owner of Tenneco Oil, the building was purchased by a group of local businessmen. It was cut in half and moved to California and Oak at the site of the Santa Fe Railroad Roundhouse. The building was remodeled to resemble a train station with a vintage Pullman car sitting on the tracks in front. An authentic red caboose was located inside for additional seating for diners. The restaurant was named the Iron Horse and it was decorated with artifacts from closed train stations throughout the state. Milton Huggs of Milt’s Coffee Shop was the owner of the Iron Horse. Milt eventually sold the restaurant and the property was turned into the the strip mall that currently occupies the corner of California and Oak. I am honored to say that Milt is my dad and I am so proud of his creative genius that has enhanced and enriched the restaurant scene in Bakersfield for the past 50 plus years."

* ... MORE MEMORIES: And finally, John Pryor adds this memory when "all development west of Oak Street was limited to cattle grazing land of Kern County Land Company. My uncle, dentist C. E. (Doc) Pryor lived on the west side of Oak, north of Brundage. He had horses corralled behind his home... My parents belonged to Stockdale Country Club at the time (with something like $22 per month for dues).  o get there, we had to drive through all open fields between Oak and Fairway except for one little frame building. The sign said Shell -- not global Shell Oil but rather local Joe Shell's 'oil patch.' That was in the 1930s and 40s. Even in the 1950s when I played on the Bakersfield College golf team (Jack Frost was coach) this was evident. The surroundings of Stockdale were all open fields for cattle grazing."