It's Thanksgiving, can we spend a few days without the post election vitriol? And celebrating the annual Pie Run and remembering the old Golden Spike Cafe on F Street

* ... GIVING THANKS: I hope we can all spend the next few days giving thanks to the blessings in our lives. There has been poison in the air ever since the election, and I for one am weary of the vitriol and insults that have worked their way into our everyday conversations and our musings on

social media platforms like Facebook. So I am calling for a truce. How about this for starters? Let's spend the next few days thinking about the things that bring us joy: the new grandchild, the children coming home for Thanksgiving, a morning run in the crisp fall air, wet puppy kisses, that new job, that new love (or even an old one), the memory of someone special who is no longer here. Happy Thanksgiving, everyone.

* ... PIE RUN: The annual Thanksgiving Pie Run, one of my absolute favorite things about living here, is back on for this Thursday at Hart Park. Thirty-five years ago John Rous and a couple of
running buddies decided to do a run on Thanksgiving morning, followed by a slice of homemade pie, and since then it has grown into one of our town's signature events. The idea is attractively simple: bring a pie, donuts or cookies and gather at Hart Park and then head out for a walk/run/or hike at the crack of dawn. Return and reward yourself with some breakfast treats. It's free of course and all it requires is an early wakeup and the will to join a couple hundred of others in a Thanksgiving tradition. The walk/run starts at the crack of dawn, so get there early. 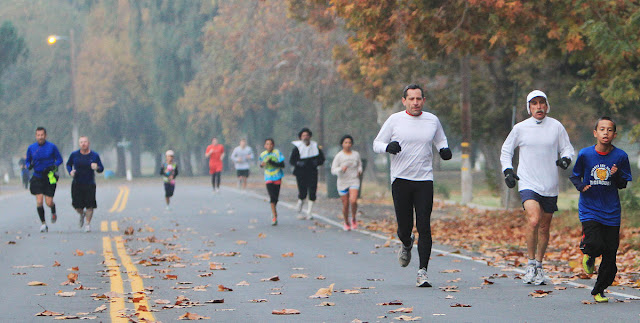 * ... GOLDEN SPIKE CAFE: Nobody really leaves Bakersfield without taking a piece of the town with them. That enduring theme was reinforced the other day when I struck up a conversation with a stranger and his son at the bar in the Padre Hotel. It turned out Robert Williams, a lawyer, and his son Ryan had driven up from Mission Viejo to take in the Sturgil Simpson concert at the Fox Theater. Williams expressed an unrestrained love for his hometown, and told me he regularly returns so his son can share in the quirkiness and warmth of Bakersfield. Williams grew up in Oildale and first attended Roosevelt Elementary and later Franklin Elementary, and then Golden Valley Junior High School. The family left Bakersfield in 1955 to move to Los Angeles. He told me his parents, Otis and Dell Williams, ran the Golden Spike Cafe at 1510 F Street. Anybody remember the Golden Spike?

* ... WRESTLING: I dropped by the home of Kevin and Tuesdy Small last week to attend a fund raising event for the storied Cal State Bakersfield wrestling program. One thing cannot be disputed: the folks who support our wrestling program (Coyote Club and others) are organized, energetic and they simply don't quit. Some 200 supporters turned out to get an update on the wrestling program and open their wallets to make sure the sport is properly funded and continues for years to come.

* ... SAFETY PINS: My earlier post about folks wearing those anti-hate safety pins triggered this response from Chris Padham: "So it's come to this? If I'm not wearing a safety pin I could be considered a unsafe person to talk or sit next to? Seems like assumptions are being made if a pin isn't worn. And if you always sit next to someone who shares your views and won't challenge your beliefs how can you grow and expand your horizons or understand the hows and whys of opposite views?"