* ... SCROOGE: Some folks in the neighborhood near Garces Memorial High School awoke the day after Christmas to find their cars had been tagged by graffiti vandals. I suppose these "artists" have

tired of bridge overpasses and alleyways and are now moving through the darkness randomly vandalizing cars parked in driveways. Let's hope they all get a visit from bad karma in the days and months ahead. 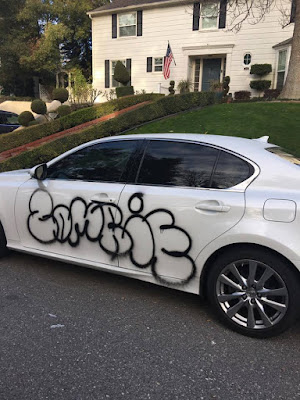 * ... MAILBOX THEFT: The amount of mailbox theft across town is simply staggering, and hardly a day goes by without someone telling me it happened to them. This time it happened to Nellis Johnson, who had put some Christmas cards in a stuffed blue postal receptacle only to find out later someone had fished our her mail. Said Johnson: "A nice lady came to our door with four of our Christmas cards she had found in the calendar department of Office Depot on Stockdale, stamps not canceled, letters opened. She was a mail carrier and advised me to go to the Post Office and report it. That afternoon, we received a UPS package from Office Depot containing six more cards, uncancelled and torn open, with a very, very nice letter of apology from the store. These letters had been found in their men's bathroom. The mail had been taken from the mail boxes outside the Stockdale post office! I had stupidly put them in an already stuffed box, laughing at us dummies who were trying to get the cards delivered at the last minute! The postal employee I spoke with was truly saddened by this event, suggested I bring the mail inside when the box was full, apologized for not having an empty post box, asked me to come in when I see this again (?) and gave me the number to the postmaster. He said he would report the matter himself, but knew my call would be needed. I learned a lesson I shouldn't have had to learn because I know better."

* ... SPOTTED ON TWITTER: "If you get a present from me with scissors and a roll of tape trapped under the wrapping paper, I'm gonna need those back."

* ... BRYAN KELLY: Mary Bensusen-Page wrote to remember the well-lived life of Bryan Kelly, who died earlier this month at the age of 63. "Thank you so much for the  Bryan Kelly mentions in your column. I have known him for 35 years. I had the privilege of being one of his original dressers when he and Michael Izquierdo performed in 'Greater Tuna.' This is a two man show in which they portrayed over 20 different characters. The show ran for nearly a year. It was done at the Moose Lodge on Old Stine Road playing Sunday evenings only.  It became almost cult-like with full houses each performance. Jim  Baldwin led the audience in singing the Star Spangled Banner each performance to kick off the show. What a special time that was! He was a professional actor having earned a SAG card after appearing in a made for TV movie starring Judith Light and David Ogden Stiers. He has performed with almost every theatre group in town in addition to co-owning with Michael, TB Productions which gave local talent a chance to shine in commercials and in print. It was an honor to have called him friend. He and Michael, on stage and off, were incredible!"

* ... OBITS: John Pryor was reading the obituary page and had this reaction to the death of Kathryn Bailey.  "We attended East High together although she was a senior when I was a sophomore. In that year, Kathryn and three of us sophomore trumpet players (Jim Jones, David Hauser, and I) entered a talent contest sponsored by the East Bakersfield Progressive Club on Baker Street where a temporary stage was constructed over the canal.  A huge crowd gathered.  What was special was Kathryn's talented transposition of her piano score of Aram Khachaturian's Sabre Dance into a trumpet trio.  Despite the high number of contestants, with Kathryn's piano accompaniment, we won first place!  As her obituary indicates, she went on in life to work with major performers in the Bay Area such as Pat Boone, Anita Bryant, Johnny Mathis, Billy Holiday, and The Four Freshmen to mention but a few -- plus multiple mentions in Herb Caen's columns in the Chronicle. Who says Bakersfield doesn't produce world-class talent? "

* ... MEMORIES: Evelyn Johnson, the longtime secretary of the downtown Rotary Club, remembers when she and husband Roy moved to Bakersfield in 1947 and "all the police motorcycles were red. One day one of the wives of a city or county official complained.. eventually they all got painted black and white."
Posted by Richard Beene at 10:28 AM