BREAKING NEWS: A Superior Court judge orders the Diocese of Fresno to produce Father Craig Harrison's personnel files that pertain to sexual abuse with minors and gambling in a potentially devastating blow to his efforts to clear his name

In a potentially devastating blow to the efforts of Monsignor Craig Harrison to clear his name, a Kern County Superior Court judge has ordered the Diocese of Fresno to produce all records in Harrison's personnel file pertaining to sexual abuse of a minor as well anything related to Harrison having a gambling problem.

The order from Judge J. Eric Bradshaw was handed down Monday, ordering the Diocese to turn over all records pertaining to Harrison having sex with a minor, sexually abusing a minor or having a gambling problem.
The ruling could be devastating to Harrison if it produces records pertaining to allegations of sexual abuse against Harrison dating back 30 or some years. Among other things, it would answer questions from critics and Harrison supporters who doubt the validity of past allegations, and it could also provide lurid details from the accusers themselves.
The court ordered the Diocese to produce:
a) Complaints and records pertaining to plaintiff having sex with a minor
b) Complaints and records pertaining to plaintiff sexually abusing a minor, and
c) Complaints and records pertaining to the plaintiff gambling or having a gambling problem
The court order, curiously, was a direct result of Harrison's legal team (attorney Craig Edmonston) filing defamation lawsuits against two Harrison critics: Stephen Brady of the Roman Catholic Faithful and Brother Justin Gilligan, a lifelong friend of Harrison's  who is studying to become a Benedictine monk. (Gilligan has since turned on Harrison, providing testimony that claims Harrison groomed young men with money and favors, talked openly about pornography and homosexuality and engaged in chronic gambling)
Edmonston's lawsuits against Brady and Brother Gilligan opened the door to discovery motions like the one San Diego attorney Paul Jonna filed on behalf of Brady. Judge Bradshaw did not agree with everything that Jonna asked for, but he did agree with what Jonna and the defendants most wanted: the Diocese personnel files.
In addition to providing details of any allegations against Harrison in Firebaugh, Merced or Bakersfield, where Harrison served, the personnel files may show the central question of: what did the church know and when did it know it?
Judge Bradshaw ordered that the records be brought to court on Nov. 25, during which time he would meet with attorneys for both sides and hear arguments about how the files should be made public.
SOME BACKGROUND: What we do know is that several young men have come forward alleging inappropriate contact with Harrison when he served in Firebaugh, Merced and Bakersfield Those cases are currently being reviewed by law enforcement authorities in Firebaugh and Merced. The Bakersfield police department closed the local investigation, saying it was impossible to establish exactly what happened in the local case.
The Diocese of Fresno has been waiting for authorities to rule on the Firebaugh and Merced cases before it rules on the fate of Father Craig. The release of the personnel files will shed new light on those old cases, potentially provide details of exactly what the contact between Harrison and the accuser was, and possibly provide insight into how the Diocese responded when a priest in its realm has been accused of sexual impropriety.
From a legal standpoint, some legal observers see this as a repudiation of Harrison's aggressive tactic of filing defamation lawsuits against Brady and Gilligan, which opened Harrison to discovery.
Said one prominent local attorney: "It was a risky strategy and I am sure they (attorney Jonna, Brady and Gilligan) see this as a gift from (Craig) Edmonston. It's not a good day for Father Craig." 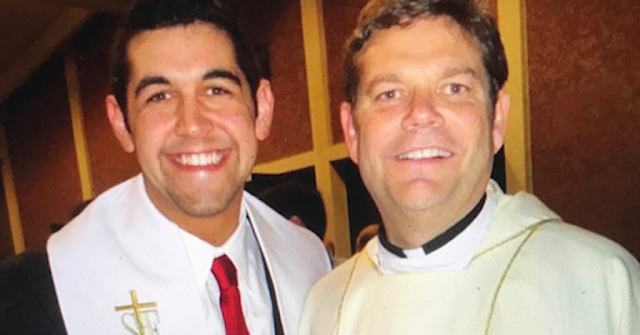 Posted by Richard Beene at 4:14 PM