Is the golden era of the "rock star" priest over? An essay on what the Fresno County District Attorney's report may mean for Monsignor Craig Harrison, his accusers, his followers and the house divided that he left behind


Welcome to Bakersfield Observed. Our mission is to celebrate life in Kern County by focusing on newsmakers and events and the local characters who make this community such a special place. The views expressed here are strictly my own and do not represent any other person or organization.

An essay expressing my views ...


When the history of the Father Craig case is written, we may look back to a single press release from the Fresno County District Attorney's Office that would change everything.

After a lengthy investigation, the DA's office had found "credible" reason that Monsignor Craig Harrison had engaged in sexually inappropriate behavior with a young man at a church in Firebaugh back in the 1990s.
And yet, no charges would be filed because of the statute of limitations. But there it was, laid out for all the world to see: investigators say there's reason to believe some of the accusations against Father Craig.
It was the journalistic equivalent of a bombshell, triggering an immediate, angry response from Harrison defense attorney Kyle Humphrey in which vowed to sue the Diocese of Fresno, cast doubt on the motives of the lead DA investigator, dismissed it all as a response to the "me too" movement and denounced some of the accusers as "drunks" and people who "chase women" and therefore cannot be believed.
But at the end of the day, that single-page press release from Fresno may be credited with marking the end to the golden era of Craig Harrison as the popular, rock star priest from St. Francis Parish in Bakersfield, an incredible, almost surreal turn of events in a story that has gripped Harrison's hometown and led to deep divisions in the community.
Never again will Harrison enjoy the lofty status of the beloved local priest who would turn heads by simply walking into Uricchio's or Luigi's, moving methodically down the aisles shaking hands,

engaging in small talk and basking in the love of so many. Never again will Father Craig preside over services at St. Francis where his wit, humor and keen sense of timing won him the adoration of a community.  Never again will Harrison wear the clerical collar and preside over lavish meals that raised hundreds of thousands of dollars for worthy causes, accomplishments that earned him a star on the walk of fame at the iconic Fox Theater and led a popular Basque restaurant to name a pasta dish after him.
That era ended when Fresno County became the first investigative agency to concede that some of the men who have accused Harrison of sexual impropriety could be telling the truth, deflating or seriously setting back the aggressive and well funded Harrison defense strategy of slapping defamation lawsuits on critics,  denouncing the accusers as drunks and liars and shrewdly trying to convince the public that the Diocese had treated him unfairly. He's not to blame, the argument went, it's the Diocese that is guilty of treating our Father Craig like a criminal. How dare they listen to these men who are only out for money? How dare anyone cast aspersions on "our Father Craig."
Clearly, this case is far from over but the Fresno County decision may have marked the high water mark of Harrison's defense; never before had any police or law enforcement agency given credence to the accusations of now adult men who were just children when they alleged Father Craig had preyed on them, much less going so far to describe them as "credible" while explaining that it is common in cases of sexual abuse for alleged victims to wait years to come forward. 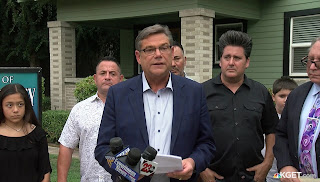 So while there are miles to go in this case, it may boil down to this: Craig Harrison may never return to St. Francis, nor will he likely ever face criminal charges. That era, those halcyon days when Father Craig was arguably the most popular and trusted man in town, is over. The beginning of the end came last April when he was placed on suspension by the Diocese, and it was carved in stone when the Fresno County DA issued its report. In the course of less than a year, Craig Harrison, a beloved BHS Driller and UCLA graduate who rose to a status of adulation rarely seen for a religious leader, a man whose name had been held in such high esteem by so many for so long, had lost it all.

WHERE DO WE GO FROM HERE? Defense attorney Kyle Humphrey told KERO TV that he is preparing a lawsuit against the Diocese of Fresno and Diocese spokesperson Teresa Dominguez, a tacit admission that the quest to get Harrison returned to the pulpit is not realistic. Rather than returning him to his job, the defense now seems intent on simply trying to clear his name. After all, suing the Catholic Church hardly looks like a ploy to convince the Bishop to return Father Craig to his job. And as he has done before, Humphrey denounced the accusers, called one a "drunk," said the Diocese was reacting to the "me too" movement and alleged - with no evidence - that some of the accusers came forward because  they "see money." He further complained that the Fresno investigators had never interviewed Harrison and he described the investigation as "totally unprofessional." So the lawsuit against the church will go forward, and that will mean a lengthy, costly trial that could go on for years, testing the patience of even Father Craig's most loyal followers. 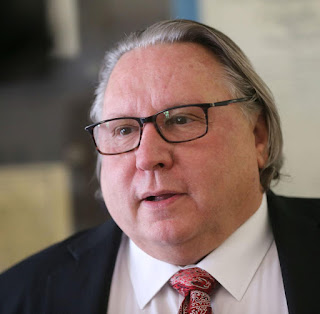 WHAT IS THE NEXT STEP? Now that the Firebaugh investigation is over, it will be up to Bishop Joseph Brennan to decide Harrison's fate. That could come rather quickly, or it could take years. No one knows when Brennan will act, but it would be hard to see Brennan bringing Harrison back now that Harrison will be suing the Diocese and his attorneys have spared no expense in blaming the Diocese for his troubles. It is also unknown how a lawsuit against the Diocese may complicate - or delay - the Bishop's decision to remove Harrison. 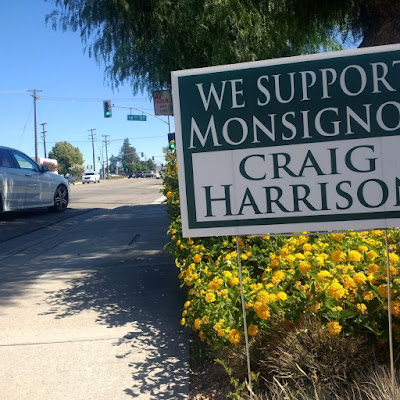 DEFROCKING: If Harrison is kicked out of the church, one of the harshest punishment's possible in canon law, he will have been subjected to a process called laicization, meaning the removal of a bishop, priest or decon from the status of being a member of the clergy. It is also called defrocking, where  a cleric is forbidden to wear clerical garb and is stripped of all duties as a priest. It is not a criminal proceeding and Harrison will be free to start a new life, perhaps as a counselor, a life coach, or another vocation of his choosing.

THE COMMUNITY REACTION: Meanwhile, the community reaction to the Fresno County press release has been predictable: Harrison's die hard supporters were not moved by the Fresno County report, and they took their fury out on anyone who dared criticize the monsignor. They reserved special invective for the Diocese of Fresno, and well heeled Catholics continued to defend him while writing checks to his defense fund. At St. Francis it is particularly ugly: some parishioners have been withholding monetary support and some are refusing to attend the upcoming Kern Catholic Breakfast where Bishop Brennan will speak. "The place will be empty," a supporter told me. "No one is buying tables this year." More remarkable, a few members of the parish have left the church and the faith itself. One prominent couple, who became Catholics late in life because of their devotion to Harrison, have left to join an evangelical church. Others are simply staying at home.

GOING FORWARD: There is no doubt that Father Craig did a world of good while serving at St. Francis. He has personally counseled thousands, provided grief counseling to so many in time of need and raised millions of dollars for the church and worthy causes. But that was before we learned there were men - first one, then two and now as many as five - who said they had a different experience with Father Craig, ugly dark episodes that no one felt possible. Those accusations are impossible to prove and there are those who still believe Harrison will be returned to the pulpit and life will resume as it left off before last April. It is either that, or the memory of Monsignor Craig Harrison as the "rock star" priest will fade from view, a historical footnote of a time in Bakersfield that no one thought would ever end.

Posted by Richard Beene at 3:08 PM