A Bakersfield Observed exclusive: A proud immigrant from a a humble village in India, Dr. Brij Bhambi draws on his past to pay tribute to his adopted country and the power that rests in American exceptionalism

Dr. Brij Bhambi is an owner-operator of the Bakersfield Heart Hospital and head of Centric Health, the leading provider of medical services in Kern County. He is a native of India and today shares some of his early experiences growing up in India.
"It's amusing to reminisce life, as passage of time ushers fading existence in to the relevance of a relic. A relic that provokes reluctant and evanescent curiosity. To capitalize on the infrequent inquisitiveness, I will share candid thoughts of an American by choice.
Times were simple in 1960s India, scarcity omnipresent and social media nonexistent. Much has changed since then. But let me not rush.
Higher education was a foreign, exotic endeavor mentioned in folklore. Distant acquaintances 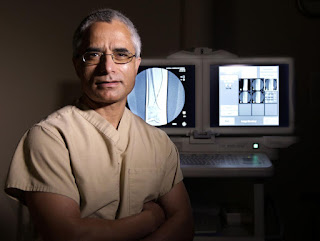 regurgitated embellished stories of enviable and likely unachievable successes. I was fortunate to be in the audience when an Indian-Canadian, in flesh, visited our village. He also had a couple Canadian professors on a sabbatical to India, accompany him at my village.
I was enthralled. But I was pre committed to USA.
My father was the first one in our village to finish sophomore year in high school, raising the roof in education. My marching orders were to raise the roof further, and then some. My father was generous in accepting my achievements as worthy endeavors.
"Nobel prize I did not deliver him.
Such audacity in a parent in a remote village in India, scares me. Such permissiveness in accepting mediocrity now and here, scares me more.
Growing up, happiness was parenthesized by proximate experiences. If want was covered, need did not need to exist. Steve Job was yet not there to insert the dictum: they don’t know what they want. We happened to be insulated from the glitters of riches. Obeisance to the elderly was engrained. Respect to authority stretched to a fault.
Ambition was not always derided. Healthy ambition was encouraged. Work ethic was foundational. Griping and grievances were looked down upon. The sacred message in Gita told us as much. Salvation depended less on charity, more on personal conduct and industry.
The founding principles of USA, reflected in my core values, had a natural tug. America drew me like a moth to flame.
Stories and anecdotes in my last 37 years of existence in USA abound.
"For now, allow me to share opportunities, successes and challenges encountered here in Bakersfield, focused specifically on Covid times.
Covid laid bare some existing fault lines. It afflicted poor and unhealthy with a greater ferocity. Elderly with constellation of comorbidities, huddled together in nursing homes, ill equipped to handle an opportunistic pathogen, were sitting ducks for disease and death. Next time we will be better prepared.
This pandemic was aggravated by preexisting behavior related morbidities. We are responsible for what we eat, drink, smoke and exercise.
Diabesity, a play on diabetes and obesity is the number one cause of preventable blindness in USA (other than politics…more on that some other time). We have primary responsibility for our health. Obesity is a growing problem that lends to diabetes, hypertension, cancer, heart disease, increased inflammation, decreased immunity, diminished quality of life and much too often, premature death
"This cottage industry of justifying obesity on everything else other than personal behavior is a blatant sham. Corporate greed encourages this malfeasance.
Obesity is an invention of calorie dense, nutritionally vacuous and remote clicking generation. We can’t out source good diet and vigorous exercise without insourcing obesity and ill health. Lessons of my childhood, accountability and no griping figure conspicuously.
Covid also laid bare our disconnect from commonsense. And common science. These mask wars under the guise of personal invincibility and purported impotence of Covid added to hundreds of thousands of avoidable deaths in USA. Definition of patriotism used to be different.
Politics needs to stay out. The concept of individual freedom strains credulity when corrupted by recklessness. It endangers the whole. How did this virtuous sentiment of personal freedom become so thin skinned and vulnerable to contrived infringements? At least keep the darn mask till the kids are vaccinated, we owe that to kids.
"Covid did bring out the best in some. The healthcare workers poorly resourced, dressed in chinked armors toiled long hours for months. Many succumbed to the virus. Solutions emerged slowly.
Collaboration among the leading scientists in the world, an uneasy alliance among normally hostile corporate world and public private partnership yielded magical vaccines in record time. This magic was wasn’t pulled out of the hat, contrary to pervasive disinformation on social media. Decades of formidable science undergirded it. The safety and a remarkable 95% efficacy rates of many vaccines, births optimism in the wary humanity. The virus that should have been buried in Wuhan may, with luck, indeed have a burial!
"But there is a rub. In a society that accepts over a dozen lifesaving vaccinations routinely has a “patriotic” segment that rather kill fellow citizens by refusing vaccine against Covid. Notwithstanding hoopla on social media, With 150+ million Covid vaccine shots administered, we are still awaiting a monkey tail, a third eye or Bill Gates microchips (that failed to control his divorce). People who choose not to vaccinate should take out patriotism as an excuse. Killing fellow citizens is counterintuitive to the purported cause.
Economic fallouts from Pandemic appeared to have irreparable consequences this time, last year. Vaccines (among the willing) have shielded us against the worst. Financial impacts were variably felt by different industries. American dollar is a default currency for the world and denominates most international transactions. Dollar being a feat currency, is anchored by the faith and trust of US government, aka tax paying citizens. That trust is an irrevocable bond. A compromised trust corrodes currency, a corroded currency wrecks cumulative labors of generations, tenuous trust undermines future endeavors.
Democracy has its pros and cons. The basic premise is an inviolable constant though. That constant is votes. A dystopian interpretation is making the rounds again. Dystopia lies in being able to corrupt the system. Being able to buy votes. Newsom can consume $20K worth wine at French Laundry and still keep the authority to distribute $600 per most voters to consolidate power, is poignantly instructive to corrupt politicians in the Third World.
"Printing to prosperity is intrinsically inconsistent with logic. It also is economically inconsistent. If indolence is aspirational to the languid and prosperity is state distributed free money then we invite financial apocalypse.
“Fruits of labor” is reverential and foundational. Labor should not be cheapened by handouts.
Aspire to be the best.
Go get a Nobel Prize for your dad.
My dad will be proud for you. And God willing, for me.
Posted by Richard Beene at 11:06 AM