Mugged on the Bakersfield bike path, a local businessman shares his horrific story of how an mid-day bike ride turned into a horrific crime that left him with a broken arm and other injuries

Welcome to Bakersfield Observed. Our mission is to celebrate life in Kern County by focusing on newsmakers and events and the local characters who make this community such a special place. The views expressed here are strictly my own and do not represent any other company or publication.
Frank Marr is a 57-year-old Bakersfield businessman whose passion for exercise finds him on the Kern River bike path multiple times a week. With the influx of homeless along with their tents, trash and unleashed dogs, the path has become hazardous but Marr and other cyclists have

continued to us it.
All that changed earlier this week when Marr was riding west-bound on the bike path near the Chester Avenue bridge. It was Wednesday, April 27, at 12:40 p.m., a beautiful day, when Marr encountered two young men on the bike path that would change everything, and leave him in the hospital with a broken arm and other injuries.
Marr shares his story exclusively with Bakersfield Observed, and we provide it here in the hope that city of Bakersfield officials wake up to the dangers that lurk on what was once one of Bakersfield's bragging rights, the extensive bike path that winds through town and connects Hart Park with Lake Buena Vista.
Here is Marr's story, in his words:
"I was traveling westbound under the Chester Avenue bridge approximately, about 100 yards from there, when I encountered two teenage boys riding razor scooters in the middle of the bike trail, not yielding to the left side. I simply said 'coming through' as I passed parallel to them. One threw a rock and hit me in the side (so) I decided to confront them. I stopped, got off my bike and approached the first one in the middle of the trail.
"He stood there stoic looking as his other friend came quickly approaching him to back him up,." It was at that point that Marr, sensing danger, said he pulled a small pocket knife from his cycling jersey pocket and flipped the blade open so the young men would back off. 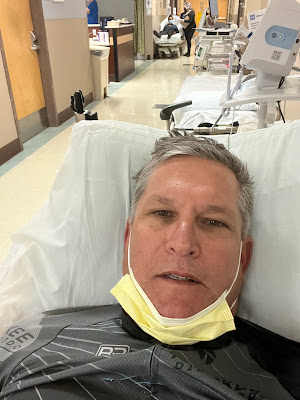 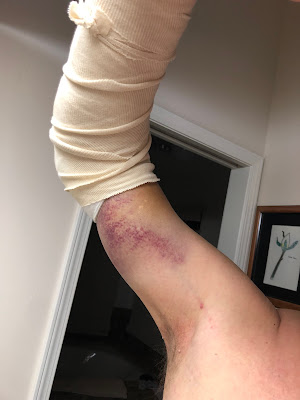 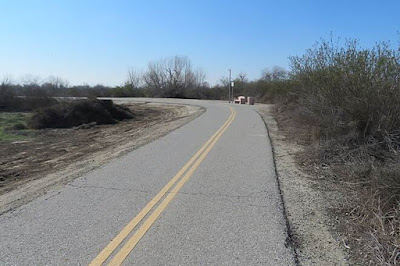 "As they did I realized there was no danger so I got on my bike and rode off. I realized my right shoe was untied so I stopped approximately 500 yards beyond where the initial confrontation began and tied my shoe. It took me about 30 seconds to get that done and I quickly got on my bike and started to ride, but to my surprise one of the teenagers - the black haired one - was behind me wielding a 4 foot long club or stick about one and a half to 2 inches diameter, striking me on the left side of my and helmet knocking me from my bike to the ground. I went over the handlebars, (and) to my surprise this kid was swinging the club as hard as he could hitting me in the knee the left arm. When I guarded my face he hit the center of my right forearm which I heard crack, and it went into a 2 degree angle and I immediately knew my arm is broken.
"I went to retrieve my knife again but my arm didn’t work, I grabbed what little was available in my left hand such as gravel and sand and through it at his face. It gave me time to get back on my feet once that happened the attacker dropped the stick and fled towards the direction of Chester Avenue. I called 911 and met police and fire department at Sam Lynn ballpark. I hope my recent misfortune can help increase the safety of this area, I thank the cycling community for all their support and good wishes for my recovery."
Editor's Note: Marr, who founded Marr Ironworks and is now retired, is recovering from his injuries. His story is the latest unnerving incident on the bike path, where runners and cyclists have been verbally harassed by vagrants, chased by wild snarling dogs and forced to endure cat calls by some of the mentally challenged denizens who live in one of the hundreds of illegal tents and shelters that line the path.
Posted by Richard Beene at 1:12 PM