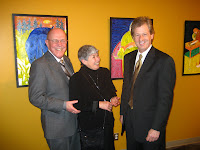 One can't help but wonder when this recession is going to start hurting some of our local non-profits and art groups that hang on by a thread in the best of times. And so it was at the Bakersfield Museum of Art tonight when it held its opening for the Ludvic painting and sculpture exhibit. It was good to see so many of the loyal supporters of the arts there: Bart and Napier Hill, Larry and Sandy Reider, Rogers and Esther Brandon, Barbara Reid, Claude and Shirley Fiddler, Milt Younger, Sheryl Barbich, Sue Jennings, Bobbie George, Cynthia Icardo, George and Marcia Giumarra among others. Museum executive director Bernie Herman tells me it's a tough year for the museum, with expected cutbacks in support from the city and county amid a general sense of recession-borne frugality. But everyone seemed to enjoy themselves, including the Reiders and Rog Brandon shown in the photo.
Posted by Richard Beene at 9:07 PM

Here’s an interesting take. Artist Chuck Close offers encouragement to collectors, donors and artists about possible changes during the Obama administration and suggests that a recession helps foster creativity:

good stuff! thanks for posting Barbara

Anything that puts a smile on my boss's (Rog) face like the one we see in the picture above is worthy of publicity! I'd like to do a "Public Affairs" show on the museum and put out the word that it needs a little help.Who can I contact?
Thanks for your blog,it's always a great read. Rach

Rach:
COntact either Bernie Herman or Beth Pandol at the museum... am sure they'd love some pub! Thanks for reading and all best