Cyclist run down and killed on South Union; the second Kern County cyclist killed within 72 hours

Received some horrible news this afternoon when I learned that Alton Saceaux, a 55-year-old local cyclist, was run down and killed on South Union Monday night. I didn't know Alton well but did know him from the occasional ride (I am also a cyclist) and last saw him in Starbucks on California Avenue and Stockdale about a month ago. Alton was always - and I mean always - utterly upbeat and effervescent. The guy loved cycling and personal fitness was a his lifelong personal mission. The cops say the guy who ran him down was likely drunk. This is a tragedy of enormous proportions: we lost a friend, a good man, a father of a couple kids, a husband, a good citizen. Kerry Ryan, owner of Action Sports over off Brimhall Road, knew Alton since 1994 and described him as "incredibly upbeat, high energy type of guy, always trying to get people into cycling, kind of a Norm Hoffman kind of guy." Norm of course was the longtime cyclist and Bakersfield College professor who died when his bike was crushed by a driver off Fairfax Road in 2001. (no alcohol involved in that) Added Kerry of Alton:

"He crewed on the 2004 Race Across America (which Action Sports won) and he was just always upbeat and willing to do anything. He'd come into the store and say 'Kerry we need to get so and so on a bike! He wants to get in shape."" 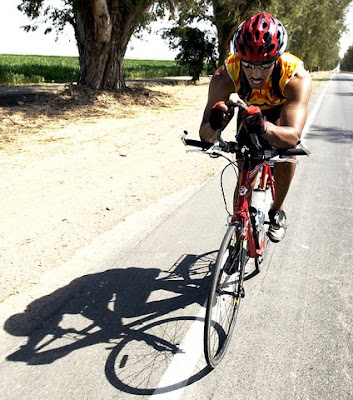 Alton is the second Kern County cyclist to die on a bike in just a few days. The other death happened in Malibu and has yet to be reported by the local press, but it involved a Tehachapi man who was completing a "double century ride" (that's a 200 mile ride) with his 14-year-old son on the back of a tandem. According to a story in the Ventura County Star, Rodrigo "Rod" Armas, 45, died at the scene after his bike was hit about 1:30 a.m. Sunday on Pacific Coast Highway. His 14-year-old son was injured but is expected to recover. You might ask why they were riding in the dark so early in the morning. The reason: these 200-mile rides take all day and last into the night, certainly dangerous in any circumstances. Once again, the cops say the man who hit the cyclists showed signs of being legally drunk. And so it goes. We lose another one. Thoughts for the families. (photo courtesy of The Bakersfield Californian)
Posted by Richard Beene at 2:01 PM

How very sad. I met Alton one time and he left a lifetime impression. That guy had great energy.

Actually, "locals" are wondering why the silence on that Malibu weekend accident as well. Maybe this week's publications will have more but make sure that you include the fact that the driver/suspect/drunk creep actually works for the city of Malibu.
Not the first bicycle accident on PCH and not the first drunk who ran, it needs to stop and we will try to find solutions in an attempt to honor this fine man and his injured son.
Put some pressure on the local papers, the local city officials, the Lost Hills Sheriff station.

I had an opportunity to ride in a, non-sponsored, "critical mass", held here in Bakersfield last week, our Second. What had occurred to me, on this ride, was the impact this "slow", socially relevant ride, truly has on our community. The safety of a large group of Cyclists expressing there solidarity and RIGHT to ride on OUR (taxpayers) Roads, in a peaceable way, can save lives! There were none of the AM groupies, no wheelmen, no ssfta'rs, no racers, JUST YOUNG PEOPLE ON BIKES. Much the same as you and I, as well as those we have lost this tragic week. I think the importance of this, to me, IS that as deep into each and every one of our Cycling passions we all are, (BMX, CycloX, Road, Mnt, or whatever) WE ARE ALL CYCLISTS! I was horrified by the News this morning, and I had, just moments before learning of this tragedy, listened to a person ask me "why do you cyclists ride out of your Bike Lane, when riding in a Group." It is a question that has been posed to me, and I'm sure ever other cyclist at some point. This person is a wife of a cyclist, so this was not some Pissed Off rant, but a question, that as Cyclist, we must address! People Do Not Think We Have a Right To Be On the Road, and the more we hide from this, the more OUR Cycling Community PAYS, WITH OUR LIVES! This is not a Road cyclist problem, or a Commuter cyclist problem, IT IS A CYCLIST issue period. I ask you, how many more do we have to loose to GET THE BIGGER PICTURE! My hope is that this be used as a wake-up call to OUR ENTIRE CYCLING COMMUNITY, that unity IS all we have, and with out it we HAVE NOTHING!

Thank you all for your time,
zachary griffin

We will be having a memorial ride for Alton thursday evening at 7pm. We will be departing from the Bike Bakersfield Offices on chester ave in between 17th and 18th(1708 chester ave)we will be riding out to the site of the accident and having a candle lit memorial. Please join us in remembering Alton and showing support for him and his family. If you have any questions please call us and ask for Tina Chapa or Kevin Talley for details at 661-321-9247 or e-mail us at tina@bikebakersfield.org

If you plan on attending please make sure you have a good red rear light and a bright front white light. So again Please join us in remembering the man that brought a smile to anyones face that he encountered.

A small video was created from photos my brother had of Alton. Please share.

It appears from the photo posted that this is South Union Ave, the same road where Mr.Saceaux was killed Monday night. Look closely, there is no safe bike lane and he is forced to ride in the traffic lane on South Union. Anyone who has ever driven this road knows how dangerous it is, even in a car. Bicyclists have just as much right to the road as anyone, but to be riding a bike on this road, at night, you are just asking for trouble. A samll blinking tail light and flimsey bike helmet will not help you if you are struck by a drunk driver.

These deaths are terrible tragedies for the families and I extend my condolences. But Mr. Griffin does not clearly answer the question posed by the wife of a cyclist: Why do large packs of bicyclists move into traffic lanes and ride several abreast? It's not an issue of being a taxpayer and presumably having "paid" for that road. It's simply dangerous and foolish; bikes move slower and are at great danger from cars and trucks. Furthermore, many drivers are unaware or blind to bicyclists; I watch drivers as they use their phones or do whatever else as they drive and swerve into legal bike lanes. Having the right of way or even being a taxpayer doesn't mean that a bicyclist will survive getting hit by a car. And yes, I'm a bicylist myself for 40 years and, yes, I've been hit by cars twice and nearly hit many more times when I was "in the right" on roads that I had paid for as a taxpayer.

If we actually had bike lanes instead of gutters with more debris than room we would not have to go in the lane.

My intent in the letter I had written was not to "answer" anything. The only question I may have inferred was the same as Rodney King, 'CANT WE ALL JUST GET ALONG?"!

Beyond that, there are NO Clear Answers! Every day we co-habitat with our Fellow Humans, like it or not! Compromise is the KEY, the same person that does what ever P/O's you the most, has some one else (could be you) whom does the same to them! i.e. The person on the Cell Phone is irritated, by the person who drives to slow, who is bothered by the Cyclists ,whom hate the speeders... so at some point we all hate each other..... and that, my Anonymous friend, is THE LARGER PICTURE,

I'v lost many friends to many things and I don't wish it on anyone. My letter was designed to get the Cycling Community to realize we are the ones whom must pay attention to this issue. This effects us more then the Drivers of said vehicles! I don't think you can come up with a "MATH" like equation to Fix Life, accidents do happen, So, minimizing the loses is "the best we can do".

THE FACTS ARE, we have had 24 cyclists deaths in 5 years, compared to Santa Barbara witch has had ZERO. There Coroners Office can't remember the last one. No doubt we would agree S. B. is busier, w/ more congestion, smaller roads, and a larger, denser Population. So why the difference ..... AWARENESS, nothing more!

Let me ask you this, do you bitch at the Combine driver as it goes 25mph down Zerker (i have, so i am guilty as well), and what good does it do, would you fight him, so what is the justification for thinking life is Perfect, because it is not, nor is ANYONE! Look out for your fellow man, and he may look out for you, and thats as close to an answer as I have.

In conclusion, I ask "Anonymous", how would you suggest we solve it? Is not AWARENESS the only answer, we all have "rights", we just have to express them in PRODUCTIVE WAY!

Easy there, young fella. No need to get riled or pull out your fists. You weren't being "called out." The question was why do packs of bicycles pull out of the bike lane and into the traffic lane. That was all.

IM POSTING A COMMENT ON BEHALF OF MY FRIEND AND WORK OUT INSTRUCTOR WHO I REALLY ENJOYED TRAINING WITH ALTON AT THE TRUXTEN EXTENTION PARK. HE SPOKE VERY NICE OF HIS WIFE AND FAMILY AWSOME POSSITIVE AGRESSIVE TRAINER. I HAD NO IDEA MY FRIEND AND INSTRUCTOR PASSED. HE WAS NOT ONLY A FRIEND HE WAS A GOOD COUNSELOR AND A WONDERFUL PERSON. I WILL MISS HIM DEARLY I WILL KEEP HIS FAMILY IN MY PRAYERS.
- JACQUELINE BLUE

I am going to write about my dear friend Los Angeles County Deputy Probation Officer Rodrigo "Rod" "Superman" Armas and his dear son. Rod(44) died riding in a cycling event in malibu, his son was severely injured. This man was a good, honorable, decent, family man. He was killed by a DRUNK DRIVER WHO WORKeD FOR THE CITY OF MALIBU..HMMM, HAS HE BEEN ARRESTED BEFORE FOR DUI, WHY WAS THE BAIL SO LOW? WHY DID HE GET TO BAIL OUT A FEW HOURS AFTER HE FLED THE SCENE OF A CRIME, KNOWING HE HIT AND INJURED TWO HUMAN BEINGS? WHY? This 14 year old boy saw his father die, and he was in the hospital. He has two sisters, and his mom. HE DOES NOT HAVE HIS DAD ANYMORE...MY DEAR FRIEND WHO I STARTED WITH IN THE PROBATION DEPARTMENT, AND HAVE KNOWN HIM SINCE THE DAY HE STARTED. HE WAS A BRILLIANT HUMAN, A GREAT PROBATION OFFICER, AND A WONDERFUL FATHER AND HUSBAND...he is gone....where is Robert sanchez,,,home without pay malibu? You found him in the bushes hiding , drunk, ditched his huge truck,....why is he free? my heart is with his family...and his son is healing physically, but his heart must truly be broken...I love you "Superman".