Twitter's break out day: when it took a revolution to prove a technology

I've written about Twitter before, stressing its importance while advising everyone to get comfortable with the technology. It's fashionable in some circles to dismiss Twitter, or to use it simply to share with the world what you had for breakfast. But sometimes it takes a world-shaking event to disprove all the doubters, and that's exactly what I believe has happened to Twitter with the events transpiring in Iran. Tehran is awash in protests and violence after the election was allegedly stolen, and it's being played out not on the networks or the pages of the newspapers, but on Twitter of all things. Want the latest from witnesses, the Iranians themselves, in their own words, or their own pictures? Go to Twitter. Want analysis? Go to Twitter. If you simply go to the most popular Twitter topics and click on #iranelection, you'll find links to incredibly graphic and timely sites like the one here, or another one here. I'd be happy to give photo credit but the photographers - in obvious fear for their own safety - are simply snapping photos, posting them on Twitter and hope the world is watching. It's time for you to watch from the best seat possible, Twitter. Amazing, isn't it? 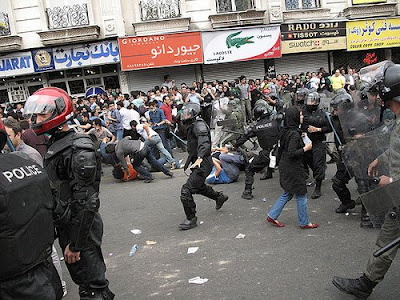 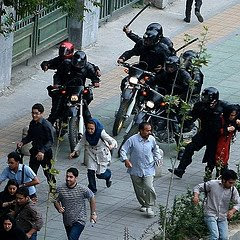 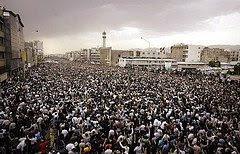 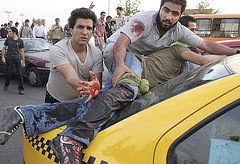 Posted by Richard Beene at 7:01 PM

During the police riots in Chicago in 1968 at the Democratic National convention, a rallying cry was "the whole world is watching."

Truth was the whole world was watching a limited image of those events after being filtered by the media.

Four decades later Twitter has given new meaning to that rallying cry and made it possible, indeed, for the whole world to watch.

The genie is out of the bottle and it's not going back in.

The tech head journalists in this week's TWIT had a great discussion on the revolution in journalism. http://twit.tv/199

Will check it out ... thanks for the link!

Here's an interesting BBC story on Twitter use, based on a Harvard study of users: http://news.bbc.co.uk/2/hi/technology/8089508.stm