Lots happening around town and more warnings that we have a long way to go before we can dig out of this hole. Here we go:

* ... HEALTHCARE REFORM: Spent lunch at downtown Rotary listening to Rep. Kevin McCarthy's take on the nation's political pulse and the battle over health care. Kevin said his upcoming town hall meeting on health care reform, set for Wednesday Aug. 26, has proved so popular he has been forced to move it a second time. It will now be held at the Icardo Center over at Cal State Bakersfield to accommodate an ever growing crowd. "We went from 300 confirmed to 800 overnight," he said. Kevin is dead set against the Obama legislation, but given the conservative temper of our community, it promises to be a lively forum nonetheless. Kevin always gets a warm reception at downtown Rotary, where he is a member and the membership consists of prominent business owners across town. It's a friendly audience and his message that Speaker Nancy Pelosi is crafting the reform legislation without input from either the White House or opposition was well received. Rotary president Duane Keathley, a partner with CB Richard Ellis, got a laugh when he presented Kevin with a special gift: a doctored picture of Duane and Speaker Pelosi for Kevin's desk. 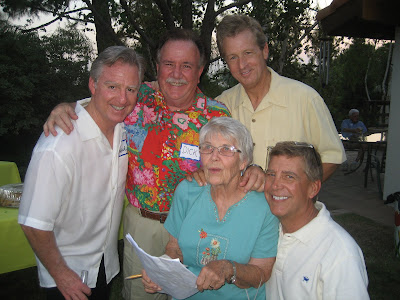 * ... COMMERCIAL LOAN COLLAPSE: I've been warning about the next shoe to drop: commercial real estate and loans. Lots of evidence that things are tough and could get tougher, Moody’s predicts the default rate on corporate loans could rise from 2.4 percent last year to 12.8 percent by the end of this year – the highest level on record. Moody's says that isn’t surprising when you consider companies need to roll over $1.4 trillion in high yield bonds and loans in coming years, with more than half coming due in the next five years. Goldman Sachs, meanwhile, is warning investors that the chances for a “double dip” recession remain significant.

* ... MORE HOUSING WOES: A study by the National Association of Realtors finds that 82 percent of people don’t have enough money for a down payment and 80 percent are waiting for the job market to stabilize before buying a home.
Posted by Richard Beene at 1:42 PM

Good to see you and Kevin are on a first name basis. Ask Kevin when he is going to start using real facts and not republican talking points that come from who knows where.

There's nothing wrong with being on a first name basis with your Congressman. However, as someone who has a background in healthcare finance, I think we should implement much of the reform that is being discussed in the current version of the House bill.

I don't believe that the "lively forum," given "the conservative temper of our community" and what is being exemplified in the town halls around the country, will be anything more than a pep rally for the party of "No." I would consider attending if I had some sense that the opposition was open to hearing "another point of view." I'm sorry to confess to the lack of courage. These town halls have become political theater for replay on you-tube, not much of a genuine forum for education and idea exchange. Maybe I am cynical.

The Republicans claim to know the best way to fix healthcare. What did they put forward when they had both houses of Congress and the Presidency?

I am not much of a party affiliator, but the Republicans lost me a few years ago.

I agree with you completely Barbara. I see no reason to go to Kevin's town hall meeting, there will only be one side heard and it will be Kevin's side. And I wouldn't be surprised that if any of us offered an opposing view we would be shouted down. The local TV stations fall all over themselves interviewing Kevin, but they never ask any tough questions. Just Kevin, you're doing a heck of job. Kind of deja vu all over again.