The fuss over Smartmeters and a student newspaper article on pole dancing: our issues of the day

From the stink over "SmartMeters" to pole dancing to celebrating 10 years at the Kern County Community Foundation, short takes around our community:

* ... SMARTMETERS UNDER FIRE: Lots of buzz and heat over these new SmartMeters that Pacific Gas and Electric is installing around town. State Sen. Dean Florez will hold a Senate hearing on the issue on Monday, Oct. 5, over at the Kern County Board of Supervisors chambers. Not to be outdone, state Sen. Roy Ashburn is now in the mix, trying to set up a Public Utilities Commission hearing on it. To me, this is one of those "where there's smoke, there's fire" issues. It just makes no sense that (even considering the rate increase) folks are seeing their utiliy bills double and even triple after the "SmartMeters" are installed. It's time to put a freeze on the installations until this issue is resolved, and time for everyone to show up at these meetings.

* ... GARCES GALA GETS A MAKEOVER: Received a nice letter from Desiree Adams who took me to task for suggesting that the annual Garces Gala fund raiser is among the local events that needs a makeover. In fact, according to Adams, that's exactly what they did they this year with an overhaul of both the Gala and the "Casual Night" auction. These two events are huge fund raisers for Garces and are critically important for this private Catholic school that has served our community so well for so many years. (full disclosure: my oldest daughter is a proud Garces grad) Adams said she recognized the event had grown stale and instituted a host of new changes, including moving the "Casual Night" to Monsignor Leddy Hall and adding a DJ for music and dancing. She said the 2010 Gala is set for Saturday, March 13 and Friday, March 19.

* ... HAPPY BIRTHDAY KCCF: The Kern Community Foundation celebrated its 10th birthday last Thursday night with dinner for its founding directors and donors over at Stockdale Country Club. Singled out for recognition was retired accountant Noel Daniels, who served as president and CEO from 2001-2008. Garrett Ming of Jim Burke Ford, past chairman of the board, did a nice job pacing the evening along. Also recognized were early donors and supporters Mort Brown and Peggy Darling. Judi McCarthy, chairman of the board, had to opt out of the evening to fly to Washington, D.C. to visit her son Rob who was just released from the hospital with a nasty MRSA infection. Rob, who works for Congressman Kevin McCarthy (R-Bakersfield) is apparently doing well and on the mend.

* ... I'LL TAKE POLE DANCING FOR $500 ALEX: In the best tradition of the college press, the Renegade Rip has managed to stir things with a feature on - of all things - pole dancing. The story in the Bakersfield College paper seems innocent enough to me but this is a town where some folks insist on imposing their morals on others, so you could have predicted some of the outcry, in letters to The Californian and in blog posts.  Be your own judge and read the story here. My advice would be: calm down. It's a college newspaper and the young folks are working on their craft. It ain't porn. (photo by David Karnowski and courtesy of The Renegade Rip) 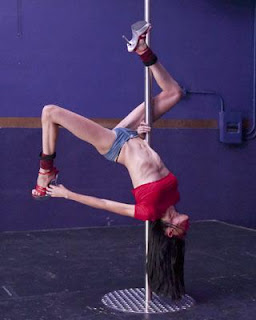 Hi, I would greatly appreciate media credits when you publish images from The Renegade Rip. You have this image cited as courtesy of The Renegade Rip but The Rip has no knowledge of you requesting the use of it. You are more then welcome to, but please include the photographers name and ask next time. Thank you.

A skelton wearing creepy underwear and hanging upside down on a pole is supposed to be sexy? Seriously?

Right you are. Photo was taken by David Karnowski. My bad.

I would like to point readers of this blog to The Renegade Rip's staff editorial from the most recent issue:

I didn't see the letters but I can just imagine, in this town. It's kind of an odd choice for a story but people need to find other things to worry about.